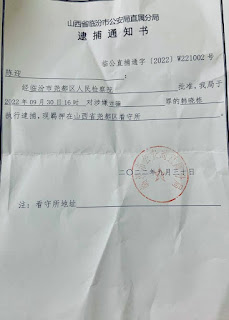 On August 19 at 10 PM, 70 Christians of Linfen Covenant House Church held an outdoor family event. More than 100 police officers suddenly showed up and took them away, confiscating cell phones. Police released some of the children around 2 AM, but all adults were still detained.

Han Xiaodong was criminally detained on suspicion of “fraud” on September 2. He was detained at Yaodu District Detention Center. His wife Chen Ying received his criminal detention notice issued by the local police station on September 23.

That same day, Han Xiaodong was put under “residential surveillance at a designated location.” Han and Chen have three young children. After Han Xiaodong was arrested, Chen Ying took care of the children on her own. Li Jie’s wife received his criminal detention notice on the same day, also under the same charge.

On the morning of September 5, officials of the local police department contacted another member of Linfen Covenant House Church, Ms. Sun, asking her to go to the police station to “talk.” She rejected their request. In the afternoon, 5 people, including police officers and community workers knocked on her door.

They came for the second time at 7 PM. This has disturbed her life. Police also contacted her employer to pressure her to go to the police station. Under huge pressure, she went to the police station. She prayed before the interrogation and was filled with faith. They asked several very tough questions. She prayed silently and responded with biblical words. They released her before 8 PM.

Through the lawyer’s best efforts, Li Jie’s wife Li Shanshan was released on bail on September 6, reuniting with her two children.

Linfen Covenant House Church is a brother church of Zion Reformed Church in Taiyuan. The government persecuted them because they refused to join China’s state-sanctioned protestant church.  In the fall of 2018, Li Jie signed “A Joint Statement by Pastors: A Declaration for the Sake of the Christian Faith” by Pastor Wang Yi of Early Rain Covenant Church. The statement urged the Chinese government to stop all suppression and persecution against Christians and to respect every citizen’s religious belief and freedom.

All the pastors and preachers who signed the statement have become targets of religious persecution. Authorities frequently threatened and harassed signatories. Preacher Li Jie was no exception. The Religious Affairs Bureau often brought more than 20 strong men to raid Linfen Covenant House Church and threaten the congregation.

Police cut Li Jie’s power and water and forced his family to move during the coldest month of winter.

According to Linfen Covenant House Church’s prayer request letter, many Christians of the church have been summoned to the local police station. Officials used many means to force them to provide witnesses and evidence against the preachers who were charged with “fraud.” These Christians faced pressure from their families, communities, employers, and police. They are living under great fear.

Linfen Covenant House Church asks fellow Christians to pray for God to protect Li Jie and Han Xiaodong, help them steer clear from the devil’s suppression, and stand firm with God during this tribulation.