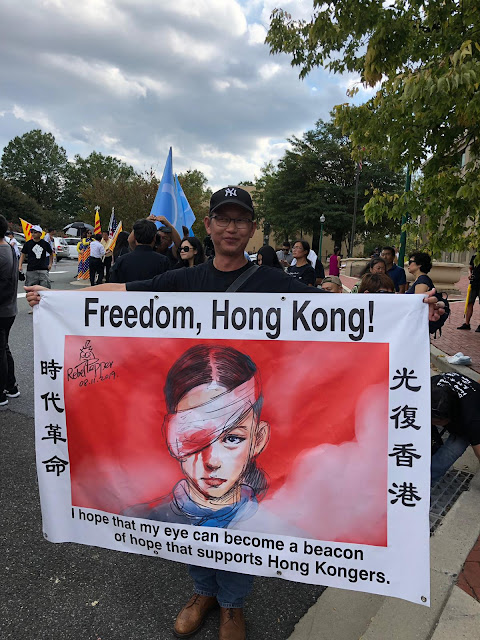 (Washington, D.C.—Sept. 30, 2019) On Sunday, a group of protesters gathered in front of the Chinese Embassy in Washington, D.C., some waving blue and white flags. They stood there for two hours, calling attention to human rights abuses happening in China and Hong Kong. One held up an image of a woman with a bloodied eye.

The protest spotlighted a multitude of human rights violations occurring in China and the former British colony and was intended as a stance of solidarity with the oppressed, many of whom are risking their lives for their freedom.

Since the beginning of the summer, millions of Hong Kong residents have swarmed the streets, calling for an end to a proposed bill that would allow China to extradite those accused of crimes to the mainland for prosecution. The police have been meeting these peaceful demonstrations with violence, firing tear gas, rubber bullets, and bean bag rounds. Many have been injured, including a medical practitioner, who was struck in the eye and became a symbol for the Hong Kong people of their struggle against the Chinese government. Now, the protesters are armoring themselves with household items such as trash cans, which they use as shields, for these activities.

Following the massive backlash, Hong Kong Chief Executive Carrie Lam withdrew the bill, but Hong Kong citizens do not see the struggle as over, as they believe Lam’s introduction of the policy makes her and several top Hong Kong officials unfit for office. In addition, some of those arrested for protesting are still behind bars, and the Hong Kong authorities continue to characterize the protests as “riots,” which they see as a biased phrasing meant to villainize them and distort the nature of their actions.

The reason Hong Kong locals feared the extradition bill roots in the Chinese government’s approach to human rights. All over China, people of various faith backgrounds, including Christians, ethnic minority Muslims, observers of the spiritual practice Falun Gong, Tibetan Buddhists, are being harassed, imprisoned, tortured, or even killed for their beliefs, while the lawyers who try to represent them are often monitored, thrown behind bars, and abused.

Just last week, Xie Yang, an attorney looking to represent the family of Wang Meiyu, a prisoner who died mysteriously in a Chinese detention center, was held for 14 hours in his hotel room six SWAT team members, several police officers, and hotel personnel. He had not been accused of a crime, but the officials demanded to see his identification and continued to hold him against his will.

Those waving the blue and white flags in front of the Chinese Embassy on Sunday were attempting to draw attention to yet another occurrence that has drawn concern from human rights experts across the globe; the mass incarceration of ethnic minority people in China’s Xinjiang region in “re-education camps.” Survivors of these facilities, which have been named by the Chinese government in order to promote the idea that they exist to provide minority people with vocational skills, say that the Chinese government routinely applies torture techniques, starvation, brainwashing, and forced labor in order to get the inmates to swear allegiance to the Communist Party.

The Chinese government also claims these camps curb extremism, but they often arrest people with little warning and no charges. Such was the case when Kuzzat Altay, a U.S.-based Uyghur who runs the Uyghur Entrepreneurs Network and has become a key spokesperson for the rights of his people, received a voice message from his father, located in China, who simply said, “Son, they’re taking me.”

That was in February 2018. Altay has not heard from his father since and fears for his safety. Moreover, Altay says that many of his family members have been taken to the camps.

The D.C. protesters chose this past weekend because it falls right before China’s National Day, which falls on tomorrow and will mark 70 years of Communist Party rule. While the Chinese government celebrates its seven decades of alleged prosperity, the people outside of the Chinese Embassy hope that their actions might draw the eyes of the public to the heart of the plight of the Chinese people, which is one that beats with their struggle for freedom, a struggle that is consistently met with oppression.