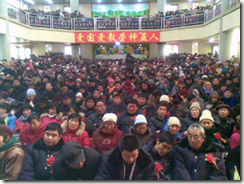 (Midland, Tex–Jan. 17, 2011)Following ChinaAid’s report last week about police raiding a mass evangelistic meeting in Cangshan county, Shandong province, attended by more than 1,000 people and arresting the famous Taiwanese preacher Lü Daihao, Radio Free Asia followed-up with this report on Friday, Jan. 14:
Radio Free Asia on Friday contacted Christians in Cangshan, who said that after the meeting was forcibly ended, the local police had “talks” with members of the church, and that Pastor Lü left Cangshan on the same day. (Photo: CangShan Church, by Ding Xiao)

A local Christian surnamed Qi told this reporter, “Yes, I know about this. Apparently a lot of people showed up, but halfway through the evangelistic meeting, it stopped. The police had everyone sit down for discussions, but I didn’t hear that anyone was taken away. Lü left the same afternoon, for meetings in Linyi,” a prefecture level city in Shandong.
This reporter was unable to reach Pastor Lü, so his current situation is unknown.

Lü, who holds a doctorate in theology, in recent years has been making repeated trips to the Chinese mainland to preach. China Central Television and Hong Kong’s Phoenix TV have both profiled him, telling his amazing life story of going from being a mafia assassin to a preacher and also mentioning his extremely close personal friendship with Taiwanese president Ma Ying-jeoh. Last September, when Pastor Lü was in the Linyi area of Zibo, a city in Shandong province, providing training to house church leaders, he was attacked by more than 100 police officers and taken away. According to Internet reports, when officials of the Religious Affairs Bureau learned who he was, they immediately became hospitable.

The church that invited Pastor Lü to preach this time was the largest house church in Cangshan county. The preacher of another house church in the area said, “Zhao Lin’s church is the largest church in our county with the most members. He built the church on top of a building, about four or five years ago. They’ve got more than 1000 people, I think.”
Chinese house church network leader Pastor Zhang Mingxuan believes that the fate of religious activities in China is dependent on how local officials interpret policy.  “Mostly it’s a carrot-and-stick approach, but of varying degrees. At the grassroots, there are some police and some religious affairs officials who lack sufficient understanding of the religious affairs policies, so there will be some unwarranted responses (from them).”

In addition to security considerations, the suppression of house churches often is mixed up with issues of evictions and land-use and other real estate conflicts. Pastor Zhang told this reporter about a house church pastor in Jianhu county, Jiangsu province, who was threatened by local police just last Friday for this very reason.
The above report was filed by Radio Free Asia reporter Ding Xiao.
http://www.rfa.org/mandarin/yataibaodao/tai-01142011120913.html