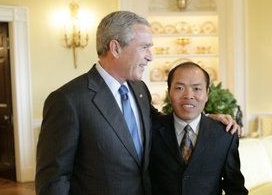 Li went to the hospital for a minor stomachache and was declared dead hours later. The hospital alleged that he had liver problems and that he bled to death, but Li was previously healthy.

China has a history of either neglecting the medical conditions of human rights activists until they succumb to them or declaring previously healthy people dead, as exemplified in the cases of Nobel Peace Prize laureate Liu Xiaobo, pro-democracy activist and Christian Yang Tianshui, and prisoner of conscience Peng Ming.

Li’s bravery knew no bounds, and he steadfastly defended the oppressed despite death threats made against him. A few months ago, he was kidnapped by Chinese officials in Zhejiang province, beaten, and forced to leave the area on the threat of dismemberment for defending farmers whose land was illegally taken by the government.

Upon hearing of his demise, many human rights activists called for China to allow an honest investigation into his death. “We are deeply saddened by the loss of one of China’s most courageous, pro-constitution lawyers,” Fu, who remained a close friend and co-worker Li for more than a decade, said. “He was treated violently last year and was threatened a number of times recently by the Chinese regime. He has been a bold and compassionate human rights lawyer, always ready in defense of the persecuted and vulnerable … The whole world should demand that the Chinese government give a full, independent, and transparent account on what caused Dr Li’s sudden death.”

U.S. Representative Chris Smith, co-chairman of the Congressional-Executive Commission on China (CECC), released a statement regarding the case, saying, “I am deeply saddened and mourn the death of Li Baiguang. Dr. Li was a father and a husband, a lawyer and scholar, and he was a committed Christian who used his legal skills to defend the poor and oppressed in China—he will be missed. Dr. Li was truly one of China’s best and brightest–committed to the rule of law, to human rights, and to a more peaceful and prosperous U.S.-China relationship. There are many unanswered questions about his death and these questions should be answered. Given that so many human rights lawyers have been disbarred, detained, disappeared, and tortured since 2015, the family should be allowed to undertake a truly independent medical investigation and get answers about Li Baiguang’s untimely death. I urge the Chinese government to recognize that such an investigation is in its best interests. At this time my prayers are with his family, particularly Xu Hanmei and Li Qingxin, Dr. Li’s wife and son.”

In addition, the NED paid tribute to Li with this article, in which NED President Carl Gershman said, “We mourn the death of Li Baiguang, who was a good and courageous man who fought for human rights and religious freedom in China at great risk to his own personal safety. When we honored him with the NED’s Democracy Award in 2008, we noted that he had been detained and physically attacked many times for his work, the first time in 2004 when he had brought legal action on behalf of 100,000 peasants who had been forcibly evicted from their land. Given this history, and reports that he very recently appeared to be in good health, it is essential that an independent and impartial investigation into Li’s death be carried out before anyone accepts the official claim by Chinese authorities that Li Baiguang died from natural causes. Absent a credible investigation, reasonable people of good will hold the Chinese government responsible for the death of Li Baiguang and will see clearly the grave dangers facing all those who seek to defend the rule of law in China and to support people whose rights are grievously abused.”

ChinaAid calls on the international community and leaders of the free world to speak out against Li’s death and call China to an account for its abusive actions so that no other person will suffer a similar fate. This organization will continue to expose the abuses enacted against human rights activists and religious practitioners in order to secure religious freedom, human rights, and rule of law for all Chinese citizens.