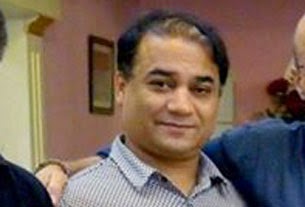 Prominent Uyghur scholar Ilham Tohti was sentenced to life imprisonment on Tuesday after a court in the troubled northwestern region of Xinjiang convicted him for “separatism,” a charge he has vehemently rejected.

The former Beijing-based Central University for Nationalities economics professor immediately protested when the verdict was announced by the Intermediate People’s Court in Xinjiang’s regional capital Urumqi.

The court also ordered that all of Tohti’s personal property be confiscated, according to his lawyer, Li Fangping, who said that the 44-year-old scholar would appeal against the verdict, which came after a two-day trial held earlier this month.

During a three-hour sentencing hearing on Tuesday, Tohti was removed from the court after speaking out in protest as officials read out the 66-page judgement against him, his lawyer said.

“It took three hours for them to read out the 66-page judgement,” Li told RFA after the hearing.

“Ilham Tohti expressed his disagreement, and said he would appeal,” Li said. “I will visit him tomorrow in the detention center.”

“This was about online expression, and to get life for that is a harsh sentence,” Liu said. “I hadn’t really expected this.”

“It took into account his lectures, his website, and also the fact that he gave interviews to the foreign media,” he said.

“But all of this took place in Beijing…and the reason they have dragged him all the way out here to be tried in Xinjiang, is because they were planning to hand down a heavy sentence,” Liu added.

Tohti’s wife Guzelnur wept loudly in court after the verdict was read and was pictured getting into a car after the hearing, with some assistance.

“I am deeply saddened and disappointed by the outcome in court,” she said in a brief statement to RFA. “Right now I do not have any energy left to talk to the media, I am sorry.”

Devastated
Beijing-based Tibetan writer Tsering Woeser, a friend and supporter of Tohti and his family, said on twitter that she had spoken by phone to Guzelnur, who was devastated by the news.

“I don’t know if she was able to meet with Ilham, because she was in pieces,” Woeser said in . “She couldn’t speak in complete sentences.”

As well as life imprisonment, the court also ordered the confiscation of all of Tohti’s assets and the deprivation of political rights for life.

“Ilham Tohti was a key figure in a criminal separatist group who used his position as a university lecturer who used his classes and his website as a channel to propagate separatist ideas and draw in confused and immature young students,” the judgement said.

“They carried out their separatist activists in conjunction with overseas organizations and individuals,” it said.

“[Tohti’s] crimes were very serious, and had a definite influence on the events of July 5, 2009,” it added, in a reference to ethnic violence in Urumqi that left nearly 200 dead and hundreds more injured, according to official reports.

“The court has handed down a heavy sentence, because the consequences of these crimes were so severe,” it said.

Sentence heavier than expected
According to defense attorney Liu, the sentence is far heavier than the 15 years or so that the defense team had been expecting.

“I said in my defense argument that [it would be wrong] to issue a heavy sentence to someone with dissenting opinions, because even if they say mostly critical things, some of the things they say are constructive,” Liu said.

Tohti’s U.S.-based daughter Jewher Ilham said she was “sad and upset” following the news of Tohti’s sentence, and declined to comment further.

The exile Uyghur American Association issued a statement condemning the sentence as an indicator of China’s lack of respect for international standards of justice.

“China has shown to the whole world that it will show no mercy to any Uyghur who dares to challenge its repressive rule,” UAA president Alim Seytoff said.

“Professor Tohti must be immediately and unconditionally released by Beijing,” he added.

Dilxat Raxit, spokesman for the Germany-based World Uyghur Congress (WUC), said the sentence sent out a “clear message” to the world.

“Any Uyghurs who were undecided, who still had some hopes that the situation of Uyghurs could be improved through legal, rational means…have now totally lost that hope,” Raxit said.

“The tragedy of Ilham Tohti shows us that there is no hope for any peaceful resolution of problems in China.”

International rights groups also hit out at the sentence, which compares with an 11-year jail term handed down to 2010 Nobel peace laureate Liu Xiaobo for “incitement to subvert state power” in 2009.

Amnesty International said the sentence was “an affront to justice.”

“This shameful judgement has no basis in reality,” Amnesty International China researcher William Nee said in a statement on the group’s website.

“Ilham Tohti worked to peacefully build bridges between ethnic communities and for that he has been punished through politically motivated charges,” said William Nee, China Researcher at Amnesty International.

“Tohti is a prisoner of conscience and the Chinese authorities must immediately and unconditionally release him,” Nee said.

Tohti was initially detained in January along with seven of his ethnic minority Uyghur students.

He has since been tortured, denied food, and shackled for more than 20 days, his lawyers have said.

The seven students face a similar charge of “separatism”, although it is unclear when their trials will take place or whether they have been allowed legal representation, Amnesty said.

“The court has no evidence to support the ‘splittism’ charge, and the trial was unfair given the serious breaches of his due process rights,” CHRD international director Renee Xia said in a statement e-mailed to RFA on Tuesday.

“Ilham Tohti must be released immediately, and the verdict must be thrown out,” she said, adding that the charges against him were “trumped-up.”

“Ilham was only exercising his right to free expression,” she said.

The court refused to call any of the defendant’s witnesses to testify during the trial, as well as barring access to the courtroom by journalists, diplomats and members of the public, CHRD said.

The Xinjiang region, which is home to millions of Turkic-speaking Uyghurs, has seen an upsurge in violence that has left hundreds dead since 2012, and which China has blamed on terrorists and Islamist insurgents seeking to establish an independent state.

But rights groups accuse the Chinese authorities of heavy-handed rule in Xinjiang, including violent police raids on Uyghur households, restrictions on Islamic practices, and curbs on the culture and language of the Uyghur people.

Chinese president Xi Jinping announced a harsh, one-year anti-terror campaign in May, following a bombing in the regional capital Urumqi that killed 31 people and injured 90.

Reported by Mihray Abdilim for RFA’s Uyghur Service, by Hai Nan for the Cantonese Service, and by Qiao Long for the Mandarin Service. Translated by Mamatjan Juma and Luisetta Mudie. Written in English by Luisetta Mudie and Parameswaran Ponnudurai.