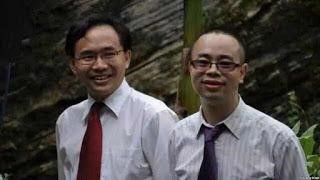 Secretary of the Central Politics and Legal Affairs Commission threatens Pastor Yang Hua: “Believe it or not, I can beat you to death”

Reliable sources verifiably identified the “plain-clothes” perpetrator, as Yunyan District’s Secretary of the Central Politics and Legal Affairs Commission. According to one insider’s disclosure, the secretary could not find any evidence that Pastor Yang Hua committed any illegal acts, nevertheless, this Party official lost control of his emotions. When he knocked Pastor Yang down, he yelled, “Believe it or not, I can beat you to death.”

“Whatever you want to do is fine,” Pastor Yang said as he stood up. “I will not fight back.

The secretary immediately began to choke Pastor Yang by the neck and then forcefully slapped him. When he finished beating Pastor Yang, the secretary brazenly stormed from the scene.

Pastor Yang had initially planned to visit some of his Christian friends in Qingdao on May 24. As several local authorities tried to prevent him from carrying through his travel plans, they transported Pastor Yang to Zhongshan East Road Police Station under Yunyan District, Guiyang City’s Public Security Bureau, for investigation.

Pastor Yang said, “I booked the plane ticket to Qingdao for tomorrow (May 24). Officials told me not to go and that [they] would return the money I had paid for my plane ticket. ‘I want to go,’ I told them.”

When the secretary attacked me, he slapped my left cheek with such force that I could hardly hear any sounds afterward. He then started cursing and said that it is now the world of the Chinese Communist Party (CCP), that—the CCP rules all.

The attack not only left scars on Pastor Yang’s ear and neck areas, but he also experiences tinnitus and force-induced, physical complications. During the next few days, doctors will continue to observe and treat him.

In 2015, after CCP authorities accused Living Stone Church [where Yang Hua (formerly Li Guozhi), serves as pastor] of not being legally registered, they shut it down. Later, local authorities forcibly auctioned off the rest of the church’s properties. In another effort to suppress the church, local officials used the vague, fabricated charge of “divulging State secrets” to sentence Pastor Yang to two and a half years in prison. Authorities released him in June 2019. Due to health concerns after serving his complete sentence, Pastor Yang urgently needed medical care.

Until [… May 23] Pastor Yang remained under officials’ close monitoring. He had plans to head to Qingdao but police informed him that he was not allowed to leave Guiyang before July 1.

In May 2018, CCP authorities sentenced Su Tianfu, another pastor of Pastor Yang’s church, to one year in prison, with a two-year suspended sentence. Officials then placed him under house arrest for six months.

https://chinaaid.org/2021/05/update-pastor-li-guozhi-brutally-beaten.html
###
Jesus answered [Pilate],
“You could have no power at all against Me
unless it had been given you from above.
Therefore the one
who delivered Me to you
has the greater sin.”
~ John 19:11 (NKJV)
China Aid exposes abuses in order to stand in solidarity with the persecuted and promote religious freedom, human rights, and rule of law. If you wish to partner with us in helping those persecuted by the Chinese government, please click the button below to make a charitable donation.