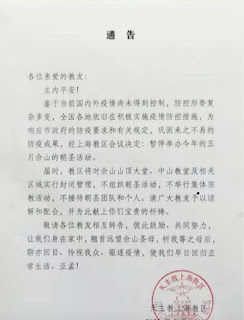 (Shanghai, China—May 23, 2022) May is the
“Month of Mary” in the Catholic tradition, and China’s nationwide pilgrimage
was canceled. May 24 celebrates The Feast of Our Lady Help of Christians. The
universal Catholic Church will hold a prayer event for the Chinese Church on
that day, and the German bishop issued this initiative.

Because pilgrimages in Donglu, Hebei province, have become strictly regulated by the government, Sheshan, Shanghai has become the only national Catholic pilgrimage center that remains active in China. It
has, however, repeatedly received harassment and surveillance. Over the years,
the Sheshan pilgrimage has become a tradition. In May, the Catholic faithful
usually go to Sheshan, Shanghai, for prayers, reverence, the way of the cross (the
stations of the cross), masses, and other activities.

This year, under China’s mandatory “zero-COVID” policy, the Catholic Diocese of Shanghai website issued a notice on March 20 to suspend the pilgrimage to Sheshan.

For 15 years, Chinese Catholics who have made
pilgrimages to Sheshan responded to the Pope to observe May 24 as the Day of
Prayer for the Catholic Church in China. In 2007, the then Pope Benedict XVI
issued a “Letter to the Bishops, Priests, Consecrated Persons and Lay Faithful
of the Catholic Church in the People’s Republic of China.” The Pope called on
Catholics all over the world to pray for China, which would place them in
intimate communion with all the other churches throughout the world. From then
on, May 24 of every year was designated as the day of prayer for the Chinese
Catholic Church.

As the annual Day of Prayer for the Church in
China is approaching, German prelate, Bishop Bertram Meier
of the Catholic Diocese of Augsburg and Chair of the Commission for
International Church Affairs, German Bishops’ Conference, issued an initiative
to all faithful on Tuesday (May 17): “Let us set a sign
of universal church solidarity on this day by commemorating our sisters and
brothers in China in intercessory prayers.”

Bishop Meier explained the current situation
in China: “As early as 2020, preaching the gospel in China was made much more
difficult under the pretext of fighting the COVID pandemic.”

Bishop Meier pointed out that on March 1, 2022,
China implemented the new “Administrative Measures for Internet Religious
Information Services,” which listed new restrictive regulations on religious
activities, ministerial services, and venues of religious activities. These
measures make the exchange of religious information and communication via the
internet and social media nearly impossible for the foreseeable future.
Currently, the number of blogs and online forums regarding Christian topics has
dwindled dramatically, and original posts have been deleted.

Bishop Meier also expressed that for a long
time, the prohibition of children and young people from encountering religion
has been implemented gradually stricter in regions all around China, and
religious education has become almost impossible.

Especially in the Catholic Dioceses of China, the harassment of
bishops, priests, and nuns who do not join the Chinese Patriotic Catholic
Association, the official representative body of the Catholic Church in China,
is becoming more and more severe. The Chinese Communist Party wants to control
officials and thus control and influence the faithful. For some bishops, house
arrests and imprisonment are permanent living conditions. The same goes for
Bishop Augustine Cui Tai of the Catholic Diocese of Xuanhua. He refused to join
the state-affiliated Catholic association (Chinese Patriotic Catholic Association) and promised to do his best to promote autonomy of the Chinese
Catholic Church, thereby de facto separation from the Pope and the Roman
Catholic Church.

Just like the previous years, the Chair of the
Commission for International Church Affairs called for prayers:

On May 24, the Day of
Prayer for the Catholic Church in China, let us pray with Our Lady of Sheshan,
and may the Chinese faithful enjoy the freedom of belief as soon as possible, so they can live enriched spiritual lives with their children.