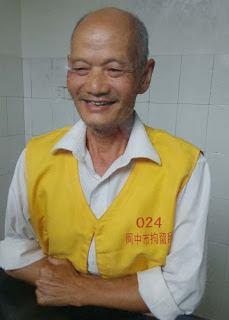 
(Langzhong, Sichuan—June 17, 2015) Police in China’s southwestern Sichuan province detained a house church member after a church gathering on Sunday; the man was sentenced to 10 days in administrative detention. Police also detained two other church members for a few hours the previous Sunday, June 7.

“We visited the police station, but the police asked us to leave without giving us any explanation. Around 6 p.m., Luo’s family was informed in a phone call that he will be detained for 10 days. Luo’s wife asked police why he was being detained, but the police wouldn’t tell her. They told her ‘You’ll know soon enough.’ When his wife visited him on Tuesday, he told her that after he arrived at the detention center, the police didn’t ask him any questions,” Li said.

“The detention notice didn’t list any significant information,” Nian said. “It only said that he will be detained for 10 days and will be released on June 24. He told me that he was walking home on the street after he got out of the church service. The police were going to detain two other church members, but they ran away so the police took Luo instead.”

Li reported that two other church members were detained following a church service on June 7. The two were taken to the police station, interrogated and released after a few hours.

Li also told China Aid that Chen Songbo, a member of a house church in Shuiguan, another small town in Langzhong, was detained on June 2 and is scheduled to be released today. Li learned of Chen’s detention when he visited Luo at the detention center yesterday.

Langzhong House Church, home to more than 1,000 church members, has encountered persecution as far back as 2011. Most recently, nine Christians were placed under administrative detention for sentences ranging from 10-15 days for “engaging in religious activities” to “disrupt public order” following the raid of their Sunday service in January. More than 20 church members were initially taken into custody; however, the other 11 Christians were released after a few hours of “education.”