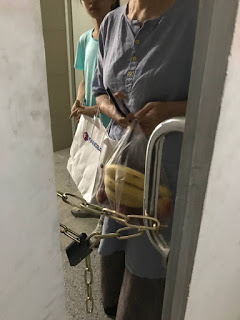 Since June 04, CCP authorities have forcibly detained Minister Wu Wuqing and his wife, chaining their door

(Chengdu, Guizhou Province—June 11, 2021) On June 8, Minister Wu Wuqing of Early Rain Covenant Church (ERCC), and his wife Xiong Meifang, residents of Damian Town, Longquanyi District, Chengdu City, remained illegally locked in their home. Previously, as several Chinese Communist Party (CCP) authorities monitored the only passageway in or out of Minister Wu’s condo, unknown individuals chained the passageway connecting the elevator and the fire door in the hallway.
Those monitoring Minister Wu and his wife 24 hours each day not only block them from leaving their condo, but they have also routinely refused to permit visitors to go inside and visit them. None of the monitors have disclosed their identities nor have they shown their IDs.

During this time, Christians of ERCC who live nearby visited Minister Wu’s home one after another, dropping off water, vegetables, fruits, and food for them in front of their door. For a few days, CCP agents monitoring Minister Wu’s condo unlocked the chain and let visiting Brothers and Sisters from the Church enter in. But then again, starting on July 08, CCP authorities refused to permit anyone to visit Minister Wu. When one Sister of the church traveled with her children to Minister Wu’s home, officers kept them away from the chained fire door. When questioned, monitors reported that their superior issued a new order—they now prohibited anyone from visiting Minister Wu or entering his condo. Later, as CCP officials barred another Sister and her children from entering Minister Wu’s condo, she visited with him and his wife over the chain shackling the door. 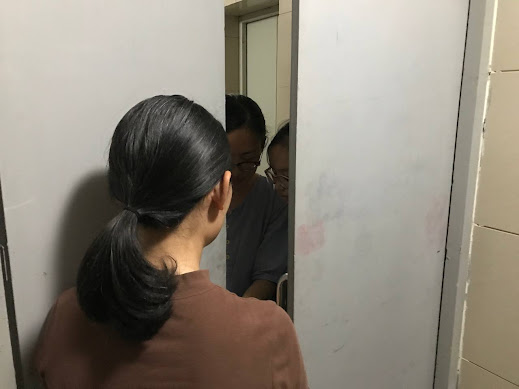 ERCC Christians can only see Minister Wu and family through an opening in a chained door.
(Photo from Early Rain Covenant Church)
Although Minister Wu repeatedly phoned police (110 in China) since June 04, officers did little to nothing each time, answering in a perfunctory manner. Ms. Xiong shared the Bible account about Moses and the 10 Commandments with several police officers. She told them that human laws originated from the 10 commandments God gave Moses. After hearing Ms. Xiong’s recount of the law, the officers left and did not process their report.

Ms. Xiong told Church Brothers and Sisters, “Our Heavenly Father locked the door, and He will unlock it when the time comes. We will pray for the police and CCP authorities every day. May the Lord gain their souls.”

CCP officials have continually persecuted Minister Wu and his family because they insist on serving the Church. As police have aimed to pressure Minister Wu and his wife into surrendering their faith, they used various approaches including shutting off their water, electricity, and gas. At one point, they also punctured Minister Wu’s car tires. They have frequently summoned him to their station for interrogations. Currently, as government officials attempt to force Minister Wu out of his rented condo as well as away from Chengdu, they increasingly restrict his and his family’s freedom. This persecution will not likely end until July 1—the 100th anniversary of the CCP.

Brothers and Sisters, please continue to lift Minister Wu and his family in prayer.
Pray that the Lord helps Minister Wu and his family stay in the city like a nail in wood.
Their gentleness and kindness testify to the grand power of the gospel. Their steadfastness testifies to the justice and holiness of Christ.
May the Lord strengthen them and protect them from the Evil One’s harm.

~ Yu Bing, ChinaAid Special Reporter
###
for which I suffer trouble as an evildoer,
even to the point of chains;
but the word of God is not chained.
~  2 Timothy 2:9 (NKJV)
China Aid exposes abuses in order to stand in solidarity with the persecuted and promote religious freedom, human rights, and rule of law. If you wish to partner with us in helping those persecuted by the Chinese government, please click the button below to make a charitable donation.