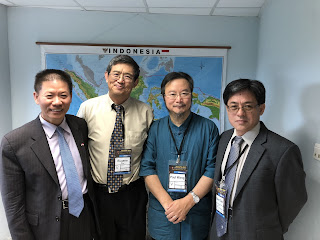 
(Jakarta, Indonesia—Nov. 21, 2017) After learning that the Chinese government harassed and prevented a group of Christians from leaving the country to attend a Reformation-themed convention in Jakarta, Indonesia, three speakers from the event penned a letter calling on communist authorities to abandon their “evil deeds of oppression” and begging those living in other countries to take action on Friday.

Pastor Wang Yi, who was supposed to speak at the event, was among the group kept from departing. Alarmed by his inability to attend, four other speakers from mainland China, Dr. Eugene Hong, ChinaAid President and Rev. Bob Fu, Rev. Paul Wang, and Rev. Dr. Ben Chen released a joint letter in English and Chinese calling for the Communist Party to stop abusing its power, cease its violation of human rights, and “amend or abandon all evil rules or regulations that violate the principles of the [Chinese] Constitution and documents of international human rights….” They also asked those who live in free societies to express their concern about China’s human rights violations, pursue opportunities to dissuade the Chinese government from practicing atrocities, and pray for Christians and adherents of other faiths who are targeted by the government.

The convention, which celebrated the 500th anniversary of the Protestant Reformation, was held on Nov. 14-20 and focused on the crucial topics of the Reformation and their implications today. It highlighted the five Solas, which were put forth by the leaders of the Reformation as driving principles, divorcing their faith from the Catholic Church. The these tenets have continued to shape the Protestant church, which now takes the Bible as its sole authority (Sola Scriptura) as it holds Jesus only as the Savior (Sola Christus), and maintains that sinful human beings are saved through faith in him alone (Sola Fide) through God’s grace alone (Sola Gratia). As such, Protestant Christians are to live only for God’s glory (Soli Deo Gloria).

The letter can be read in full below.

ChinaAid stands in solidarity with Wang and the other Christians prevented from attending and reports on their story in order to expose the abuses they’ve suffered and promote religious freedom, human rights, and rule of law.

Here We Stand: A Call from Jakarta

God is a triune God – Father, Son and Holy Spirit. He is the Creator and Redeemer. He is the God of individuals, churches, history, the world and the whole universe. The Kingdom of God reveals His righteousness, love, holiness, wisdom and mighty power through the church. He is also the God of patience and forgiveness, and He waits for sinners to repent. The purpose is to allow sinners to ask for forgiveness so they do not fall into judgement.

On the evening of November 13th, 2017, at the opening ceremony of the conference held in Jakarta to commemorate the 500th anniversary of the Reformation, we were shocked to learn that Rev. Wang Yi, pastor of a house church in mainland China, and other brothers and sisters in Christ were harassed by government authorities in varying degrees, to the extent that they were forcefully prevented from leaving the country to participate in this event. This was a once-in-500 years’ event, which saw more than 4,000 participants from 24 nations and regions gathering together to commemorate the Protestant Reformation.

We, the undersigned pastors who are invited as the speakers from mainland China along with Pastor Wang Yi, are moved in Christ with the same spirit of suffering as those who suffer. We were shocked and saddened to have witnessed such violent acts that oppressed basic human rights of freedom of religion and faith, and we register here our deepest concern and protest! Based on the biblical truth and individual conscience, we hereby sincerely and solemnly call upon the Chinese authorities to confess and repent of their sins before God, the Creator of heaven and earth; fear the supreme sovereignty of God; admit to the limitation of their own power; and acknowledge the spheres of individuals, family, church and state and recognize that each of these spheres has its own respective rights and responsibilities from God. Each one has its own boundaries, and none of them should infringe on the rights of the church. As the servants of God for justice, officials should govern in a way that guarantees the basic human rights of all the citizens living in mainland China, Hong Kong and Macau. All people, including Christians and adherents of other faith, human rights defenders, even Communist party members, suspects of corrupt officials and other criminals, were endowed with universal rights by God, and all should be protected by due process, because every person is made in the image and likeness of God. Any government has authority to neither control the Christian church nor restrict any citizen’s freedom of religion, belief, thoughts and speech, and their expressions in the public square accordingly.

The present Constitution of mainland China and the Universal Declaration of Human Rights, which China government subscribes to, and other international human rights treaties all clearly guarantee the basic rights of every citizen in the matter of the freedom of religion and belief. This includes the freedom to assemble, the freedom to proselytize and also the freedom to travel aboard to participate in religious activities. At the same time, we express deep concern over the impending implementation of the Regulations on Religious Affairs on February 1st, 2018. This is because this document that came in the format of a legal document from the Chinese State Department essentially violates and limits the freedom of religion and belief as accorded by the Constitution.

Based on the holy calling of ministers of the Word of God, we call upon brothers and sisters in Christ in the mainland Chinese church to do the following:

1. Pray that the LORD grant us strength, love and self-control, that we would stand firm in the grace of our LORD in the face of all sorts of persecutions; that we will no longer be afraid and will preach God’s Word boldly.

2. Pray that the LORD strengthen us, so that whether in season or out of season, we would persist in holding public worship services and gatherings as God endows, facing persecutions with a heart of thanksgiving and joy in the Lord. May we bear our cross and follow our LORD.

3. Pray especially for the churches and the pastors, that God would grant us with faithful and wise pastors, willing to die for the flock, and who would courageously lead the churches to be the salt on the earth, light in the world, the city upon the hill, and the lamp upon the lampstand by empowering of the Holy Spirit who raised up Jesus from the dead even the midst of persecutions.

4. Let us mourn with those who mourn, and rejoice with those who rejoice. Pray for those churches, individuals and groups persecuted for righteousness’ sake earnestly, so that we can speak for them boldly, walk alongside and support each other.

5. Pray that the LORD enable us to become faithful peacemakers of the kingdom of God, bringing peace between God and men. Pray that we will strive to be obedient to all authorities that God has established in the family, the church and the state. Pray that we obey God rather than men under any circumstance. The name of the LORD is to be praised!

6. Continue to pray for all those in authority so that they will confess their sins and repent, and become righteous servants of God; that they may not find themselves in the fearful judgment under the wrath of God. In this manner, we will be able to live Godly as followers of Christ in peace as we proclaim the Gospel.

Based on the due respect and love for public office ordained by God, we are lodging our strong protest to the mainland Chinese government, and call upon the authorities to:

1. Stop the evil deeds of oppression and violation of the fundamental rights of every Christian church and Chinese citizen.

2. Amend or abandon all evil rules or regulations that violate the principles of the Constitution and documents of international human rights, especially the Regulations on Religious Affairs.

3. Not to abuse the powers of the state, and use excuses like “sinicization” or needing to implement “Chinese characteristics” to intervene and control internal religious affairs, interfering with the faith matters of individual citizens.

We call upon all the lovers of freedom and peace, churches, nations and international organizations of the world to:

1. To show concern and condemn the evil deeds of the mainland Chinese government, which violate basic human rights.

2. To take all opportunities and influences to urge the Chinese government to amend or abandon such evil laws.

3. To pray earnestly for the persecuted Chinese churches and all faiths, and also pray for the Chinese government engaging in persecutions. May this government truly become pleasing to God with constitutional democracy and the rule of law. May it become a blessing to its own people and to all tribes and nations of the world.

Proverbs 14: 34: “Righteousness exalts a nation, but sin is a reproach to any people.”

May God have mercy on China and bless China, and make His face shine upon China, so that the world may know the way of the LORD, and all nations may know God’s saving grace in Christ. Oh God, may the nations praise you, and may all people praise your holy name!