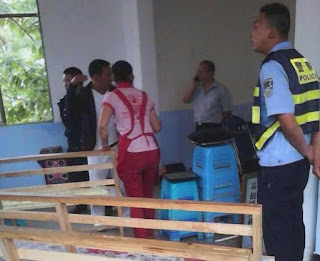 
(Daguan, Guizhou—June 1, 2015) Dozens of special armed police and police dogs raided a Sunday worship service in southwest China’s Guizhou province last week, taking into custody dozens of the 70-80 who had gathered for the house church service, 11 of whom remained in detention days after the raid.

The raid on the house church meeting in the town of Daguan, in Qianxi County, Guizhou, occurred on May 24, when 30-40 special armed police, accompanied by police dogs, surrounded the home of Xu Guoqing in Wenming village where the Christians had gathered, China Aid’s special correspondent Qiao Nong in Hong Kong reported. Both Xu Guoqing and his wife were taken into custody.

“They surrounded our church and even brought in dogs. And they let the dogs loose to bite us,” one church member, Xu Xiaoqin told Qiao. “When I said I was a member of the church, they sicced the police dog on me to bite me.”

Police immediately shut down the gathering of mostly farmers and confiscated everything at the meeting site, including benches and musical instruments, all without showing a search warrant, said Xu Xiaoqin, who tried to protest when police started to confiscate their personal items.

Xu Xiaoqin said police took all the men into custody and at least one man was handcuffed during the drive to the police station in downtown Daguan. The only people who were not rounded up were the elderly and some of the women. As of May 26, 11 people, including the couple who was hosting the meeting, remained in custody at a county detention site.

The raid was not simply a move by a single local police station but rather was a mobilization of armed police, officials from the religious affairs bureau and state security, as well as officers from the public security bureau, Xu said.

The local government had already threatened to revoke the cost-of-living stipends paid to the local residents if any converted to Christianity or attended Christian meetings. Any who were Communist Party members would also face disciplinary action.

When Qiao called the Daguan police about the raid, they refused to answer any questions, saying they were not handling the case.

The 11 who were still in custody on Tuesday afternoon were: Xu Guoqing, and his wife, Zhou Xunmin, Xu Guoying, Huang Huaxing, Tang Honggui, Xu Guoqin, Wang Yanggui, Fu Hanguo, Wei Qing, Kang Chengju, and Kang Chenglin. An example of detention notices received by the detainees family members can be seen below.

The Guizhou raid occurred on the same day that the religious affairs bureau and police mobilized more than 100 police officers and security guards to search the Guangfu Church, in the Baiyun District of the southern city of Guangzhou, Guandgong province. They confiscated computers, speakers , books and other items, and took into custody the church’s leader Ma Chao (who uses the English name Mark) for several hours of interrogation.

Family members of Huang Huaxing:
Huang Huaxing, due to a violation of the public security bureau, according to Article 27, Item 2 of the Regulations of the People’s Republic of China on Administrative Penalties for Public Security, was sentenced to 10 days of administrative detention and is currently detained at the Qianxi County Public Security Bureau Detention Center.
Notice is hereby given.
Date: May 25, 2015
Stamp: Qianxi County Public Security Bureau
Family member’s signature: Huang Junyou
Date: May 29, 2015