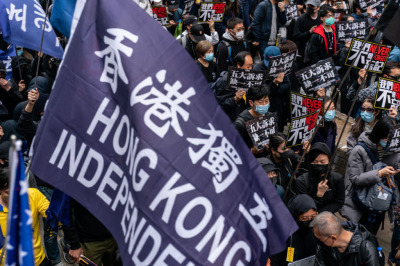 A new law enacted in Hong Kong last week is the final death knell in the city’s democracy. China’s national legislature approved electoral changes intended to ensure there are “patriots governing Hong Kong.” Of course, in Communist Party-run China, “patriotism” means rubber-stamping the Party’s wishes. Pro-democracy supporters hold placards and shout slogan as they take part in a march during a rally on New Years Day on January 1, 2020, in Hong Kong, China. Anti-government protesters in Hong Kong continue their demands for an independent inquiry into police brutality, the retraction of the word “riot” to describe the rallies, and genuine universal suffrage.

With dozens of the top pro-democracy political candidates now in prison, Beijing has crushed the hopes of hundreds of thousands of Hong Kongers who took to the streets in a call for greater democracy. As Hong Kong endures political repression under the Chinese Communist Party’s tightening grasp, the freedom-loving world must act to punish Beijing.

The new election law gives Beijing far greater input into choosing the members of the local legislature. Short on details, the measure’s new requirement of “patriotism” will block any dissident from being elected, or even anyone reluctant to affirm the policies of the Party.

As justification for the continued assault on Hong Kong’s autonomy, Beijing loyalists now argue that the “one country, two systems” principle agreed upon prior to the British handover in 1997 refers only to economics, not politics. They are changing the rules in the middle of the game.

###
“Shall I not punish them for these things?”
says the Lord.
“Shall I not avenge Myself
on such a nation as this?
~ Jeremiah 9:9 (NKJV)
China Aid exposes abuses in order to stand in solidarity with the persecuted and promote religious freedom, human rights, and rule of law. If you wish to partner with us in helping those persecuted by the Chinese government, please click the button below to make a charitable donation.