The Politics of Inclusive Pluralism

The Politics Of Inclusive Pluralism

“Long live the red terror!” This and other political slogans were used by China’s communist rulers as leverage for conflict and conflict management during 1949. China’s Cultural Revolution movement understandably fueled anger, fear, and terror among Chinese citizens. Currently, contrary to the positive façade that China, under the control of the Communist Chinese Party (CCP), tries to project regarding human rights, a dark reality reveals a brutal authoritarian state with no concern for religious freedom.

What guiding philosophy could best help procure, provide, and protect religious freedom for all in a post-communist, Christianized, democratic China? Bob Fu argues that while various Christianity-oriented theories may appear promising, they fail to provide an adequate pluralistic foundation for protecting the religious freedoms of people of all faiths and none. The predominant theory of political liberalism in the West likewise fails to prove sufficiently inclusive for all faiths and worldviews. As an alternative, the author defends Baorong Duoyuan (inclusive pluralism), his own contextualized theory modeled after principled pluralism. This model, he believes, has the potential to help ensure that religious freedom for all becomes a reality. 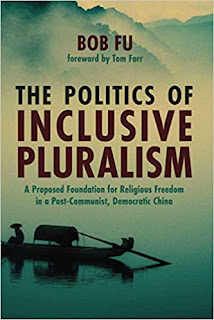 The politics of Inclusive Pluralism

Purchase The politics of inclusive pluralism