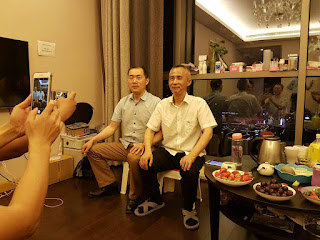 (Beijing—May 23, 2017) The youngest legal assistant arrested as part of a nationwide crackdown on human rights recently broke her silence to write an emotional letter to colleagues imprisoned with her, describing the enormous burden of the torture they endured and inviting them to join with her to end China’s abuses.

In the letter, Zhao Wei, a 26-year-old legal assistant arrested connection with the human rights crackdown known as the 709 case, describes her struggle to break through the fear and torture that defined her imprisonment in order to take her first steps into speaking out against injustice. She notes the resilient love of her parents, which prompted them to travel the nation to free her, explains her inability to win the fight for China’s freedom on her own, and encourages the activists who underwent similar experiences to stand with her.

Prior to her arrest, Zhao participated in numerous human rights movements, starting her social justice work after she graduated from Jiangxi Normal University’s journalism department. In October 2014, Christian human rights lawyer Li Heping hired her as his legal assistant. Both of them were taken from their homes in Beijing on July 10, 2015.

On Jan. 8, 2016, the Tianjin police formalized her arrest on charges of subverting the regime. After delivering what police called a “candid confession,” she was released on bail on July 7, 2016. The testimonies of other prisoners of conscience, however, allege that most of these so-called “candid” confessions are obtained after authorities subject the prisoner to extensive torture, nullifying their legitimacy.

A translation of the letter can be read below.

ChinaAid shares the testimonies of people such as Zhao Wei in order to stand in solidarity with persecuted Christians and promoter religious freedom, human rights, and rule of law.

I am a coward
I don’t say these things because I’m brave. We are equally timid. I scream when I see rats and cockroaches. I run away when I see a large dog. I don’t dare to look up when watching a horror movie. I cry after I visit the haunted house in an amusement park.
I have already used my parents as a pretense, masking my innermost selfishness, cowardice, and ignorance. I cheated myself of having a clear conscience [by thinking] I compromised for my parents, but I know that when all is said and done, it was because I was unable to bear the injuries and compromised.
See, I am not more courageous than you. I am a coward. But, if you are with me, your courage plus mine, can we face this world together?
I know; do you fear being retaliated against? Zhang Kai suffered from suppressions after he chose to follow his conscience, but the trouble was temporary. Regarding retaliation, I don’t have a clear solution, but I know that no one has the power to threaten us forever.
What caused me to speak out
The strength to surpass our enemies rests in God. Among the comrades from the 709 incident, many are brothers and sisters [in Christ]. Our identity as Christians must also bring about in us a spirituality that causes complications. Do not be afraid of the world and reject sin to a fierce degree; this is the regulation that gauges our faith. Brothers and sisters,
Although we are weak and our environment is harsh, we cannot fix our eyes on worldly affairs. We find God with our confidence. God will not abandon his children in need. We have to adhere to the laws of God in order to extract freedom from oppression.
These are the things that God has gracefully given me: My parents are my foundation—the tall mountain that I look up to. My parents, over sixty, do not even know how to book a plane ticket. It is hard to imagine that they successfully accomplished the mission of rescuing a family, traveling extensively to save me.
[They traveled] from the small city of Jiyuan to Beijing, Tianjin to Xianggang and met with human rights lawyers, foreign reporters, NGO workers, and ambassadors, calling on all the world to speak up. [I asked her,] “How did you do this?” My mother said, “I can risk everything to save you.”
My mother had aged and lost weight. White hair, like frost, consumed her look, but she is still beautiful. What is love? What is courage? I behold a great mountain with awe. My mother’s incomparable integrity, courage, wisdom, and fearless love has been by my side and is the foundation for me to be able to see and take this first step.
I can do anything with you
I thirst to compensate my parent with filial piety, but with what kind of love should I regard them? Is daring not to live out the glory of God loving them? Indignation will eventually erupt; is deceit loving them? Is dragging them to the abyss of fear and frequently worrying them until they lose courage loving them?
If I thoroughly love them, I have to give them freedom without fear. Being bailed out is not freedom. The end of the 709 crackdown is not freedom. The only way to reinstate freedom is to shatter the chains, break the deep-rooted fear of authorities, not let our emotions control and suppress us, and stand reasonably next to each other.
I took the first step, but at the same time, I promised my mother not to take anymore “risks.” Instead of living in The Truman Show, I hope I can live a life that is independent, autonomous, and true.
My comrades, would you, after rational reflection, like to join me to care for one another and bolster on another? I can’t guarantee any outcome, but we regard our free life as a treasure; should we abandon that without even trying?
Let the world hear our voices. I don’t have the courage to do it alone, but I can dare to do it with you, because I know there are countless of you. I look forward to seeing you. Blue street lamps are emerging from the morning mist, relatively hopeful. We unite with each other before the dawn.
April 28, 2017