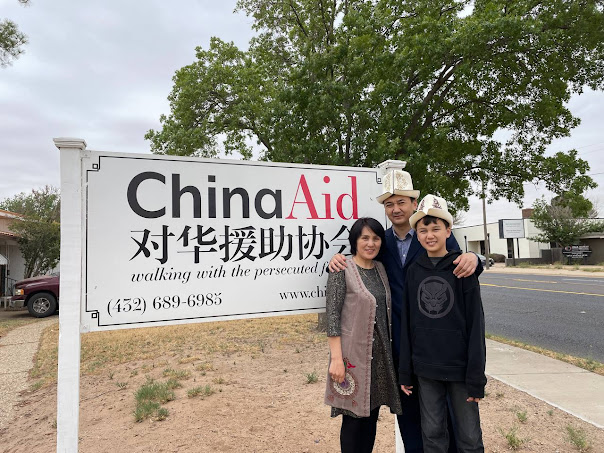 Undeniable Favor part one: “I will fear no evil, for you are with me”

(ChinaAid, Midland, TX—May 9, 2022) ChinaAid strives to expose, encourage, and equip. Our goal remains to encourage the abused, but their stories can also encourage you. In this multi-part series, we hope to show you the story of Ovalbek Turdakun, also known by his English name Joseph, and his Kyrgyz family. Joseph is a Christian survivor of the Xinjiang concentration camps.

Their story testifies to the Lord’s provision, kindness, and favor. What happened in the camp was painful and traumatic. Only God truly knows the horrific reality within the camps of Xinjiang, and one day an evil regime will be brought to justice. However, God wants to show His people how He is moving despite the hopeless landscape.

Joseph was originally from Xinjiang. He met his wife, Zhil, through a mutual friend. She attended college in China, but she grew up in Kyrgyzstan next to its largest lake Issyk Kul. Zhil and Joseph were devout Christians before they married and had their son, Daniel.

Authorities took Joseph into custody in February 2018. He briefly recounted his 10-month experience in a Victims of Communism press conference once he arrived in Washington DC. As reported by Axios, Joseph will testify about his time in the camp to the International Criminal Court (ICC). In the “training center,” Joseph was subject to ambiguous medical procedures, as well as constant intimidation, surveillance, and abuse.

However, two years before Joseph was taken into custody and forced labor, his pastor approached him with a warning. “She told me she had a vision,” he recalled. In the vision, his pastor saw Joseph in a dark room full of smoke with no windows and no light. Then, a hand appeared and took him away. Joseph knew immediately what the dream implied: prison. However, he believes this vision for the Lord prepared him for the camp.

“At first I was terrified,” he admitted, “but when I was in the camp, I saw the room they made me live in. It was dark. So dark that the dust in the air made it seem like the room was full of smoke. I was reminded that in that same dream a hand reached through a wall and pulled me out. I held onto that hope.”

While unimaginable horrors persisted in the camp, Joseph testified about how God worked in the hearts of the inmates around them. They had no privacy in any part of the complex, with cameras in their rooms and microphones for monitoring. 50 to 60 inmates filled the shower room every day, and it was the only place where Joseph could talk to people about Jesus. The showerheads made enough noise to mask their conversations. In the first few months, there was hardly anyone who would talk to him about God. “How could God let us be here in this place?” they would ask. “How could God allow our children to be abandoned?”

These kinds of objections and arguments persisted for three months until they became more willing to listen. “Without God, we would have no life,” he explained. Joseph then started to share Scriptures with them in the shower, passages Zhil shared with him on her visits. “God did many miraculous things,” Joseph said, “He was with us.”

Joseph and the prisoners were allowed to sing in the shower. Some sang Communist Party anthems to avoid punishment, but Joseph quietly sang Psalm 23 to himself. When the camp released Joseph, he was the only one— much like the dream two years prior. 22 other prisoners from his cell stayed behind after his release.

The kind of favor shown to Joseph and his family is nothing short of unbelievable. So much favor that Joseph had lunch with his wife and son every week during his 10-month imprisonment.