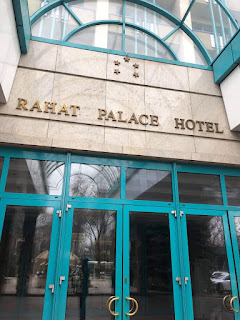 Undisclosed individuals attempt to take human rights leader against his will

(Astana, Kazakhstan—March 22, 2019) Unidentified individuals broke into the home of a member of a Kazakh human rights organization on March 15, intending to take away the group’s founder, who is already under house arrest for his work advocating for victims of China’s crackdown on ethnic minority Muslims.

Serikzhan Bilash, the founder of the human rights advocacy group AtaJurt, was kidnapped from a hotel room in Almaty and taken to Astana, Kazakhstan on March 10. Then, he was placed under house arrest at the home of a member of AtaJurt and has been under close surveillance since then. Police keep a close watch at the door, and people have not been allowed to enter the home.

On March 15, however, an ambulance pulled up to the place, and two men got out, entered the home, and tried to take Bilash away, stating that they would take him to a hospital. Bilash refused to go with them.

One of his supporters worried that the people may have been sent from the government and expressed concern for his safety. Bilash’s brother also stated that he fears his brother be taken away, they will not be able to receive updates from him, or that he might day. He is calling on the international community to pay close attention to Bilash’s case.

In addition, at least 100 Kazakh people have posted videos requesting that foreign human rights organizations and governments pressure Kazakhstan to release Bilash immediately. One said, “Many children lost their father or mother, and their family members are being held in the educational concentration camps in Xinjiang, China. Some of their passports have been confiscated, and they cannot leave the country. AtaJurt … helped these children call on various countries and write letters to the Kazakh government and Ministry of Foreign Affairs, hoping that the Ministry of Foreign Affairs will negotiate with the Chinese government. Now, the people who have received aid are publicly demanding that the [Kazakh] government release Serikzhan.”

“Educational concentration camps” refers to a prison system in Xinjiang that the Chinese government uses to hold the region’s ethnic minorities. The region is currently in the midst of a crackdown on residents who are not of Han Chinese descent and who practice Islam, and experts estimate local authorities have arbitrarily imprisoned 1-3 million people living in the area. Officially, China claims that such efforts prevent terrorism and that the camps are educational, but the prisoners often have no terrorist connections and have not committed crimes, and firsthand accounts from surviving inmates reveal torture, starvation, and brainwashing.

Since its founding, AtaJurt has served as a platform for ethnic minorities whose families have been persecuted in China’s crackdown on them and Islam, the faith that many of them practice, allowing them to publish petitions, record and post videos, and hold press conferences in order to expose the abuses enacted against their loved ones.

Because of this, more than 30 people located in Kazakhstan but loyal to the Chinese Communist Party accused Bilash of running an “illegal organization” and damaging the relationship between China and Kazakhstan. Bilash is also being investigated for “incitement of racial hatred,” according to his attorney, Aiman Umarova. If convicted, Bilash could face up to 10 years in prison.

Meanwhile, the AtaJurt office in Almaty remains closed, and some members of the organization have been investigated by the police. They members are forbidden from orchestrating any kind of event, including rescuing Kazakhs from China.