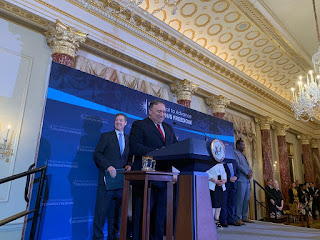 
Updated at 8:18 a.m. on July 19, 2019. A previous version of this report incorrectly stated that Bob Fu met with President Trump. This version corrected the error.

At the meeting with Trump, which was attended by  Manping Ouyang, the wife of persecuted house church leader Su Tianfu, and prominent victims of religious persecution, the president demonstrated concern for religious freedom and support of those who have been victims of oppression for their faith.

A video of the meeting can be viewed on the White House’s YouTube channel.

Taking place from July 16-18, the Ministerial was convened by Secretary of State Pompeo.

The final day included an address by Pompeo, and Vice President Mike Pence, who notes attendees are present “because we believe in the freedom of conscience, the right of all people to live out their lives according to their deeply held religious beliefs.”

Fu expressed thanks on Facebook for the chance to “spend some substantive time” with Pastor Brunson and his wife, whose “dedication, calling and heart” towards China he calls encouraging.

Fu also spent time with Taiwanese Representative to the United States Stanley Kao, alongside other prominent leaders in the U.S. and overseas.

In a different Facebook post, Fu writes how a session with Speaker of the House Nancy Pelosi and former Congressman Frank Wolf, anchored by U.S. Ambassador-at-Large for International Religious Freedom Sam Brownback, sent a powerful message to the Chinese Communist Party (CCP).

According to Fu, America “is united with bipartisanship to take action for religious freedom in China,” especially concerning the Uyghurs in concentration camps.

Fu also writes there is bipartisan consensus in Congress to sanction Xinjiang leader Chen Quanguo for the persecution of ethnic minority people within his jurisdiction.

Fu was also featured at a July 15 event in the Dirksen Senate Office Building called “Silicon Valley and China: The Rise of Religious Oppression through Tech.”

Later, the China Coalition released a letter to Silicon Valley CEO’s calling on them to make sure technology that China intends to use to abuse human rights does not make it to the country.

A variety of religious persecution survivors were invited to the Ministerial in order to emphasize the importance of advancing religious freedom as a foreign policy component. Those invited include representatives of the North Korean people, Rohingyas, Uyghurs, and Yazidis, among others.