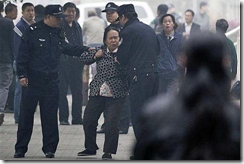 Police officers take away a female petitioner from a court house, where jailed activist Wang Lihong attends her court appeal case on charges of creating a disturbance when she helped lead a protest on behalf of three bloggers, in Beijing, China, Thursday, Oct. 20, 2011.
As China prepares for its next leadership reshuffle in 2012, the country is facing growing social unrest and criticism over its tightening of Internet controls, and an ongoing clampdown on bloggers, lawyers and activists. A recently released annual congressional report shows how this broad decline in human rights comes despite China’s notable economic progress and ascendance on the global stage.

Lawmakers and activists say the decline in human rights in China is not limited to freedom of expression and tightening controls on the Internet, but also includes declines in workers and women’s rights, ethnic discrimination and religious freedom.

Chris Smith, a Republican lawmaker from the state of New Jersey and head of the Congressional-Executive Commission on China said the group’s 10th annual report paints an extremely dire and frightening picture of the current state of human rights in China.

“China’s leaders have grown more assertive in their violations of rights, disregarding the very laws and international standards that they claim to uphold, thereby tightening their grip on Chinese society.”

Congressman Smith said Chinese leaders no longer respond to criticism of their human rights, and increasingly use international laws to defend their actions. Smith spoke Thursday at a Committee on Foreign Affairs hearing.
The chairwoman of that committee, Ilena Ros-Lehtinen, a Republican from Florida said more than a decade after China’s entry into the World Trade Organization, economic liberalization has failed to bring reform.

“How can a ruling clique which causes human rights lawyers to disappear, which persecutes and tortures falun gong practitioners, which drives Tibetan monks to such despair that they set themselves on fire, and which hunts down North Korean refugees on its northeast frontier ever expect to be regarded as anything but a barbaric regime, certainly unworthy of the name of responsible stakeholder,” said Ros-Lehtinen.

Rights activists who testified at the hearing cited new lows in many areas.
Bob Fu, the founder and head of the Christian rights group ChinaAid said the government’s stance toward religion is hardening.

Earlier this year, dozens of members of Shouwang Church, one of the larger unofficial Christian groups in Beijing, were arrested while trying to hold an Easter service.

Christians have not been the only target of persecution. The situation has become incredibly dire for Tibetan monks in China, where 11 monks and nuns set themselves on fire.

Bhuchung Tsering, with the International Campaign for Tibet, said, “There is no doubt that all these [self-immolations] are taking place because of the repressive policies of the Chinese government in all Tibetan areas. And it is particularly so that in recent years the Chinese policies have been restricting or even further limiting the small freedom that Tibetan people had, the space they had to express themselves.”

The government also has been moving to limit free expression on a broader scale and more intensely than ever before, imprisoning activists, bloggers and lawyers as it has moved to prevent Arab Spring-like uprisings from coming to China.

Human-rights activist John Kamm, who heads the Dui Hua Foundation, said according to Chinese government statistics more than 1,000 people were arrested and indicted last year for endangering state security, a charge that is used frequently against political dissidents.

Kamm said this is the third year that number has risen above 1,000.

“In light of these, this high level of arrests, and the virtual absence of any acts of clemency toward prisoners convicted of speech and association crimes, we now can say that there are more people in prison for committing political crimes than at any point since 1989,” said Kamm.

Kamm added that according to Chinese government officials, more than half of the trials in 2010 for endangering state security took place in China’s remote region of Xinjiang – which has seen continuing tensions over Chinese government rule.

“Seventy-five to 80 percent of endangering state security crimes are speech and association crimes, and the sentences are long, acquittals are unheard of in these trials,” said Kamm.

China has seen an growing outpouring of dissent online during the past year, and social media websites such as Weibo have played an increasing role in highlighting injustices and putting pressure on the government.

But a tightening of Internet controls continues, the report notes.

In May of this year, China established a State Internet Information Office to step up supervision of online content. Chinese authorities also have recently announced plans to step up controls of the Internet and social media sites.
According to a report by the Chinese Academy of Social Sciences, China saw a 41-percent drop in the total number of websites last year to 1.91 million. The report said the decrease was not related to an effort to control speech, but instead listed a government campaign targeting “obscene” websites and tough economic times as a reason for the sharp decline.