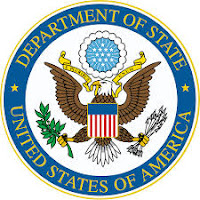 In the press briefing announcing the 2014 IRF Report, both Kerry and Saperstein expressed concern for Zhang Kai, a Christian human rights lawyer who is being held in secret detention for legally representing persecuted churches, and cited his case as an example of the harassment faced by China’s Christians and the legal community. Saperstein added that, during his trip to China in late August of this year, 10 religious freedom activists, including pastors and human rights lawyers, with whom he had arranged to meet were all detained.

The report addresses additional persecution enacted against Chinese Christians, including forced cross removals and church demolitions in Zhejiang province and the harassment of Shouwang Church in Beijing. Officially, the local government claims they are removing the crosses due to violations of “zoning laws” but continues to detain Christians who protest against their actions. Similarly, officials detained attendees of Shouwang Church, a house church in Beijing, without charge.

In its summary of China’s religious freedom abuses, the report mentions China 18 member Zhang Shaojie, a pastor who was sentenced to 12 years imprisonment for advocating on behalf of his church.

Additionally, the report decried the persecution of Uyghur Muslims, Tibetan Buddhists and Falun Gong practitioners. The report indicated that fearing “separatism, religious extremism, and terrorism,” Chinese police implemented laws that restrict various aspects of the Muslim faith, including the freedom to worship in government buildings and wearing Islamic garb that is associated with “religious extremism.” The disagreements that arose between Muslims and the Chinese government escalated into Chinese police raiding homes and murdering Uyghur Muslims. Tibetan Buddhists also experienced continued persecution, which the Chinese government justifies by claiming it is preventing “separatism and pro-independence.” Estimates stating that 2,201 Falun Gong practitioners are being detained for up to three years without a charge were also provided.

The findings of the 2014 IRF Report indicates that China’s suspicion of religion as a detriment to society is unfounded. In the opening remarks of his speech, Kerry said, “The message at the heart of this report is that countries benefit when their citizens fully enjoy the rights to which they are entitled. And this is not a hopeful theory; this is a proven reality. No nation can fulfill its potential if its people are denied the right to practice, to hold, to modify, to openly profess their innermost beliefs.”

Likewise, Saperstein stated that China’s religious organizations are making profoundly positive impacts in their communities and encouraged the government to view them as models of what might happen if China embraced religious freedom.

The Department of State concluded addressing China with a response to the information uncovered in the report: “We urged Chinese authorities to take steps to reduce tensions, uphold China’s international commitments to protect religious freedom and other universal human rights, and reassess counterproductive policies in Xinjiang and other ethnic areas. The United States also strongly supports the preservation of Tibet’s unique religious, cultural, and linguistic traditions and the protection of human rights for Tibetans…”

Saperstein provided additional comments on Zhang Kai and the cross demolitions during the Q&A portion of the release, which can be viewed below.