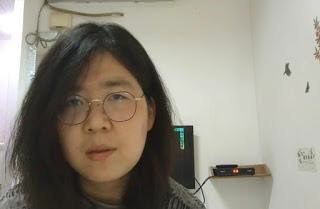 (ChinaAid, Midland, TX—November 10, 2021) Recently, the US State Department called for the
unconditional release of Zhang Zhan, a Christian journalist detained for
drawing attention to COVID-19 in Wuhan. Zhang Zhan’s life continues to hang in
the balance in Shanghai Women’s Prison as she continues her hunger strike,
protesting her arbitrary detainment. ChinaAid plans to award Zhang with the Lin
Zhao Freedom Award in early December.

Ms. Zhang, a former lawyer, gained notoriety for her
coverage of COVID-19 in Wuhan at the onset of the pandemic. She criticized the
Chinese government’s management of the virus and exposed how severe the virus
affected the Chinese people. On May 14, 2020, Chinese Communist Party (CCP)
officials suddenly took her away. The Court sentenced Zhang to four years in
prison for “picking quarrels and provoking trouble.”

Zhang Zhan started refusing food during her detainment
in protest. As reported by The Wall Street Journal and The New York Times, she weighed around 165 pounds before her detainment but now weighs under 90 pounds.
Zhang’s mother collapsed after seeing a video of her daughter unable to stand
or lift her head, ChinaAid sources report.

On Monday, the US State Department called upon the Chinese
government to release Zhang Zhan:

Next, the United States
is deeply concerned about the deteriorating health of PRC citizen journalist
Ms. Zhang Zhan. According to multiple reports citing her relatives’ comments,
Ms. Zhang is near death. In December of 2020, Beijing authorities sentenced Ms.
Zhang to four years in prison on charges associated with her journalism on
COVID-19 in Wuhan. The United States, along with other diplomatic missions – we
have repeatedly expressed our serious concerns about the arbitrary nature of
her detention and her mistreatment during it. We reiterate our call to the PRC
for her immediate and unconditional release and for Beijing to respect a free
press and the right of people to express themselves freely.

The Lin Zhao Freedom Award commemorates Chinese
activists who advance civil society and rule of law in China. ChinaAid recognized Gao Zhisheng for the award last year.  As previously reported, ChinaAid still plans on awarding Zhang Zhan for her
bravery and determination in exposing the CCP.

Ms. Zhang will receive the Lin Zhao Freedom Award in Washington DC next month, on or before International Human Rights Day, to commemorate her
fight for freedom in communist China.

China Aid exposes abuses like Zhang Zhan’s in order to stand in solidarity with the persecuted and promote religious freedom, human rights, and rule of law. If you wish to partner with us in helping those persecuted by the Chinese government, please click the button below to make a charitable donation.