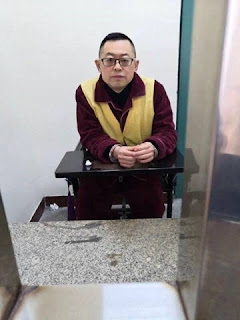 (China—June 8, 2022) Wang Yi, the pastor of Early Rain Covenant Church, turned 49 on June 1. It was also his fourth birthday in prison. An overseas group of Chinese Christians called Wang Yi Resource Library held an online seminar for Pastor Wang Yi’s pastoral letters via Zoom. Nearly one thousand pastors, elders, and Christians across the world attended the online meeting to commemorate the imprisoned pastor.

Pastor Wang Yi is the leader of Chinese house churches, a poet, a former professor, an influential public intellectual, and a constitutionalism scholar. His poetry background made his sermons full of passion, and his education in theology, constitutionalism, and the humanities added profound realities and a touch of culture to his sermons. Unlike Christians who dodge topics of politics and religion, Wang Yi cared about justice and talked about it candidly, which drew a lot of attention. Consequently, his sermons and articles had been censored for a long time.

In late August 2018, Pastor Wang Yi drafted a Joint Statement: A Declaration for the Sake of the Christian Faith. He launched a campaign calling on pastors to speak up and fight for God against the Chinese government and its new Religious Affairs regulations.

On December 9, 2018, Pastor Wang Yi was arrested. Over 100 people including the church’s elders and coworkers were arrested with him. The church was dissolved, and other congregants were deported. A year later, Pastor Wang Yi was sentenced to nine years on the charges of “inciting subversion of state power” and “illegal business operations.”

Police implemented a news blackout on Pastor Wang Yi’s status in prison since his imprisonment, so people know little about his condition. In the past three-and-a-half years, only one photo, a few poems, and short remarks he wrote in 2020 were released. In his released remarks, he said:

Jiang Rong, the wife of Pastor Wang Yi, visited her husband in late October 2021, which is the first meeting Pastor Wang Yi had with his wife in three years. ChinaAid sources reported that Wang Yi lost a lot of weight but maintained his health. In addition, guards allowed him time to read in prison.

Most of Pastor Wang Yi’s sermons and articles have been censored in mainland China since he was imprisoned. Some overseas Christians who have been impacted by Pastor Wang Yi voluntarily spent time and money establishing Wang Yi Resource Library so that his sermons and writings were accessible to more people. The collection includes all of Pastor Wang Yi’s sermons, lectures, articles, and books since he became a Christian in 2005, so it is an official, comprehensive, and pragmatic archive that demonstrates how Pastor Wang Yi responded to the current time, situation, needs, and challenges with his faith, service, and life. Unfortunately for English viewers, the content is exclusively available in Chinese.

Pastor Wang Yi wrote 221 pastoral letters from December 5, 2009, through November 9, 2017. Four anthologies and one selected edition of the letters were published. Li Yingqiang, the elder of Early Rain Covenant Church said, “These writings are like letters written to his family. They document the process of how he pastored the church, like a parent raising children.”

The meeting started with the prayer made by Professor Immanuel Ke from Taiwan Providence University. Professor Ke is Pastor Wang Yi’s close friend in Taiwan, they are brothers in Christ, spiritual besties, they value each other, miss each other, work, and fight together with one heart. Professor Ke met with Pastor Wang Yi for the first time in 2017 when he taught classes at South China Humanities College and served Early Rain Covenant Church. The next year, Professor Ke came to Chengdu again, serving Early Rain Covenant Church and visiting Wang Yi. He intentionally left some daily necessities there, indicating that he would come again next year. A few months later, however, the Early Rain crackdown happened. Professor Ke penned the foreword of Transformation of the Gospel—Meditation on Religious Reform, and one paragraph says:

Pastor Wang made keen observations and reflections on Chinese authorities, culture, and the Chinese church’s situation. Most of all, he deeply loves Jesus Christ and our Heavenly Father, devotes himself to passionately proclaiming the gospel in an atheist country, dedicates himself to house churches that are not authorized by the country, and involves himself in building churches. He plants gospel seeds with tears and waits for the harvest of Early Rain while facing harassment, attack, persecution, and smearing.

The title of Professor Immanuel Ke’s talk in the meeting is Wang Yi’s War and Fellow Warriors. He said:

Many people think that Wang Yi had political intentions, which is in fact a very shallow and colossal misunderstanding of him. If we read his books, we would know that he is not politics-oriented. Rather, his thought and the gospel he has acknowledged are regarded as a huge threat to the authorities. Authorities want to be God and be worshipped by thousands of people, but we Christians should worship God only, so in the battle, Wang Yi voluntarily carries out the house churches’ tradition developed by Wang Mingdao—the tradition of not giving up to rulers, the liberal Christianity, or all anti-Christ thoughts, conducts and systems. Wang Yi has inherited the tradition which makes uncompromising ministers tortured enormously and persecuted heavily. However, it is the torture and persecution that nurtures and builds up Chinese house churches.

The meeting lasted 4 hours, but many Christians felt that it was short, commenting that it was “a spiritual feast,” touching and encouraging.