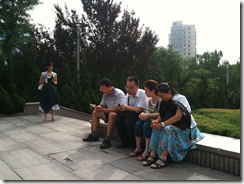 China Aid Association
(Beijing – July 3, 2011) In Week 13 of the Shouwang Church clash with the Chinese government, at least 21 church members were taken into police custody Sunday morning. All but two were released by 9 p.m., according to church sources.
Several photos posted on the “Sign Petition for Shouwang” website at  www.HelpSW.org <http://www.helpsw.org/> showed that at least five members of the unregistered Shouwang house church were able to gain access to the open-air plaza in northwest Beijing’s Zhongguancun area that has been the church’s designated outdoor worship site since April 10, when the church was evicted from its leased meeting space,  precipitating the on-going church-state standoff.
(Photo caption: At least five Shouwang members gained access to the second-level platform at the church’s designated outdoor worship site. Seated and singing worship hymns when this photos was taken on July 3 at 8:40 a.m are: Chu Xiaodong, Xu Guoyong,Yu Xingmei, and Chen Hualin. Names order updated on July 5 12:30pm EDT  Another unidentified Shouwang member is approaching the group.）

In previous weeks, police presence at the plaza was heavy, with police officers ringing the plaza and turning away or detaining anyone who tried to enter the plaza.
Despite high temperatures in the 90s Fahrenheit, Shouwang members turned out as usual. Those who had been detained included: Xu Guoyong, Lan Shunfang, Fan Chunliang, Guo Liping, Ma Liang, Huang Yikun,  Liu Ruiling, Zhou Wen, Hu Jian, Ma Rui, Li Wei, Wang Yeyu (Wang Qimin), Peng Shide, Tao Bailiang, Sun Xinwei, Ma Ying, Chen Hualin, Liu Xiao, Fu Jing, Chu Xiaoodong and his wife Yu Xingmei.
Saturday, July 3, was the 12th wedding anniversary of Chu Xiaodong and Yu Xingmei. They were the last two remaining detainees who had not been released by the end of the day Sunday.
On Shouwang’s Google Buzz page, church members kept a running tally throughout the day of who was in police custody and who had been released. When Fu Jing was released about 6:30 p.m., one church member wrote, “Fu Jing is out! Praise the Lord! She said that when she was inside and was experiencing a moment of weakness, from outside came the sounds of brothers and sisters singing hymns …. Thank you to those brothers and sisters who were there [waiting] for her!”
As in previous weeks, those church members who were not under house arrest or had not been detained at the outdoor worship site and still  had freedom of movement fanned out across the city to the various police stations where church members had been taken to, bringing them food and water and waiting outside until the detainees were released.
The police action against Shouwang Church members this past week started even earlier than in previous weeks, as the authorities moved to ensure that no social disturbance be allowed to mar the marking of the 90th anniversary of the founding of the Chinese Communist Party on July 1. Some Shouwang Church members were put under house arrest as early as Tuesday, as compared with most weeks when church members were confined to their homes starting on Friday evening.
One Shouwang couple appealed on the church’s Google Buzz site for help from other church members because they could not go out to get food or to help an out-of-town family member who had come to Beijing and been cheated. Their guards roughed up and injured the wife in the entryway of their apartment building as 30 people stood by and watched, doing nothing.
The “Sign Petition for Shouwang” website carried this appeal, “We earnestly ask those in the Body of Christ who are overseas to continue to pray for [this] brother and his family, that the Holy Spirit might comfort them and help them stand firm in the faith.”
Shouwang’s pastoral staff and top leaders all remain under house arrest that began in early April. Despite the weeks of official persecution, 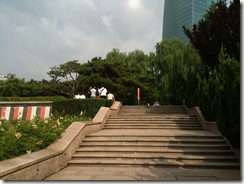 Shouwang remains steadfast in its refusal join the official government-run Three-Self Patriotic Movement or to break up its congregation into smaller meeting groups that the government has seemed willing to tolerate when house churches have grown too large.
(Photo caption: Several Shouwang Church members being taken away by police officers or agents of the Domestic Security Protection Department.)