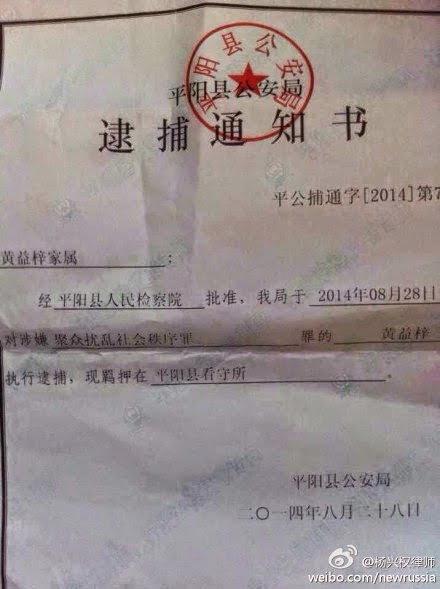 
(Wenzhou, Zhejiang—Sept. 9, 2014) Police in Pingyang County in the coastal Chinese city of Wenzhou formally arrested Pastor Huang Yizi of a Wenzhou-based church in late August for “gathering a crowd to disrupt public order” after he was initially taken into custody on Aug. 2.

Huang had been repeatedly summoned by the Pingyang County Public Security Bureau after he helped Christians at Salvation Church, also located in Pingyang County, defend their cross from forcible demolition on July 21. Church members and other local believers, including Huang, formed a human wall at Salvation Church’s gate to keep authorities out. What resulted was a bloody altercation that left 14 Christians with serious injuries.

Police finally took him into criminal detention on Aug. 3. He was formally arrested on Aug. 28.

After the incident, Huang led Salvation Church members to make inquiries at the public security bureau. It is speculated that his charge stemmed from this event.

Prior to his detention in August, Huang was detained at Sanjiang Church, a mega-church in Yongjia County, Wenzhou, for his role in the demolition resistance there in April 2014.

Huang’s arrest notice is translated below:

To family members of Huang Yizi:

Upon approval from Pingyang County People’s Procuratorate, this bureau placed Huang Yizi under arrest on August 28, 2014 on suspicion of “gathering a crowd to disrupt public order.” Huang Yizi is currently being detained at Pingyang County Detention Center.