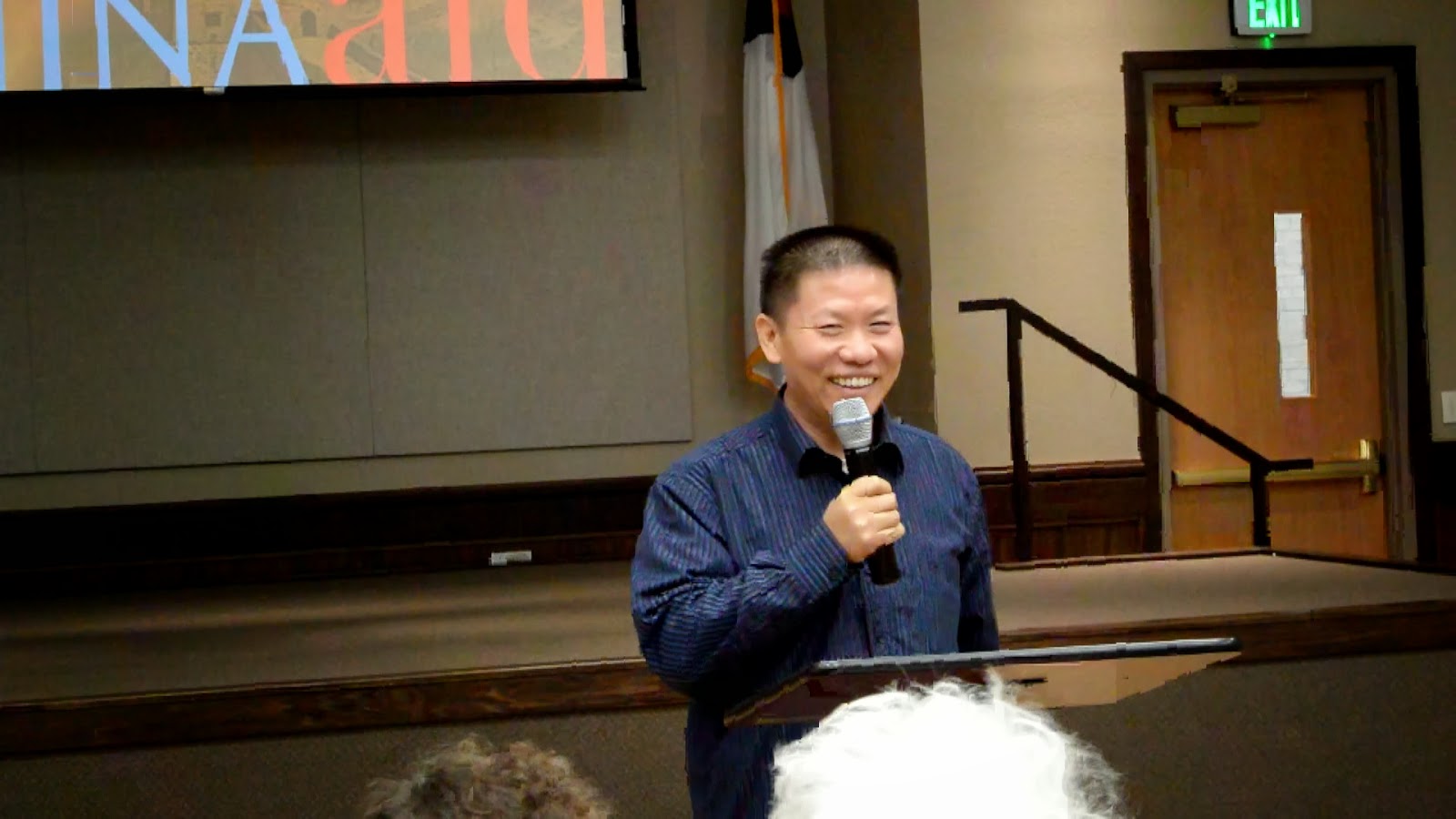 ‘When we work together, I think the Lord will turn the world around:’ Fu gives presentation at local Baptist church

(Midland, Texas—Jan. 8, 2014) “When we work together, I think the Lord will turn the world around,” Bob Fu, president and founder of China Aid Association, said as he began his presentation to the Midland First Baptist Church’s men’s group on Monday.

Fu set the tone of the presentation when he read Matthew 25:31-40 to the group. Fu later said that this passage is what drives him, that when he receives phone calls in the dead of night, with someone on the other end telling him about a house church that was raided, a village standing against the government as their homes are threatened, or a young couple who lost their unborn child because they were forced to abort.

“Anytime I heard a brother in China get a phone call, ‘oh, these brothers were put in a detention center,’ I could see how these brothers and sisters would be treated. I immediately have that picture in my head, and I always have that call [for action] because of Matthew 25. ‘If we don’t speak up for them, no one knows.’ Yes, God knows. These are the least of my brothers,” Fu said.

“I would always think what could have happened if we do not intervene,” Fu said.

Fu told the group that there are times when he receives immediate updates about a situation in China, but there is nothing he can do at the time. All the congressmen and media are asleep, he said. “The first thing we do is pray. Prayer is the most important. Because as fellow human beings, we feel very desperate. In the night, when we can’t do anything, we can only pray,” Fu said.

An extra effort
Also in relation to Matthew 25, Fu said that during the 10-plus years that ChinaAid has been in operation, only one person has ever asked to fulfill a particular part of the scripture: I was in prison and you came to visit me (Matthew 25:36 NIV).

Fu said that Devra Marcus, a retired Washington, D.C. physician and wife of well-known human rights activist Michael Horowitz, is the only person throughout the organization’s history to even ask to visit a detained Christian in China.

Of course, Horowitz is also worth mentioning. He played a key role in the United States’ allowing individuals to gain asylum or refugee status for religious persecution in the mid-1990s.

Horowitz is currently working to persuade U.S. Congresswoman Kay Granger, member of the House of Representatives’ Appropriations committee and chairwoman of the State and Foreign Appropriations Subcommittee,
to restructure its budget. At this time, approximately 1.5 percent of the budget is appropriated for Internet development.

Horowitz, joined by many others, say that if the subcommittee will devote even 5 percent of the budget towards Internet development, proven software can be used to breach Internet firewalls in Iran, Vietnam and, of course, China.

The First Baptist Church’s senior pastor, Randel Everett, told the group that, should the plan to breach the “Great Firewall of China” succeed, Fu will lead a service at the church, which will be broadcasted via the Internet to 500,000 Christians in mainland China.

“It is the spiritual Berlin Wall,” Fu said of the firewall. “I think if we do this, dictators will fall.”

Recent persecution
Fu also addressed ongoing persecution, saying that some in the audience may not even be aware of it. “If we only watch CNN, we may only watch the prosperity, the glamor of China,” Fu said. “China is the no. 2 country with the number of billionaires, after the U.S. China has another world record: China is the country that has jailed more prisoners of conscience than the rest of the world combined.”

“Even on Christmas Day…a pastor in [China’s central] Henan province was kidnapped along with 16 other believers,” Fu told the group (https://chinaaid.org/2014/01/believers-in-henan-still-barred-from.html).

“Another preacher from south China who went to visit this church,” Fu said referring to the picture on the left, “you can see, was chased and beaten up and then grabbed on the street and sentenced to 15 days of administrative detention.”

Another church Fu told the group about was Shouwang Church in Beijing. The church has more than 1,000 members, made up primarily intellectuals—professors and students, Fu said.

“Since two years ago, the government will just not allow them to continue to worship in their rented building. And when believers used their own money to purchase one floor of an office building, the government refused to give them the key.

“Now every Sunday, even this Sunday, believers are arrested. The pastor’s on house arrest,” Fu said, adding that the pastor sends recordings of himself giving the sermon to be played wherever the church members happen to gather on Sundays.

Fu also noted the recent persecution of a house church in inland Shaanxi province, where three believers, including the church’s pastor, are being placed under official arrest for charges of “organizing and using an evil cult organization to obstruct the law” (https://chinaaid.org/2014/01/public-security-bureau-submits-arrest.html).

‘There is a cost’
Fu told the group that God uses these tragedies to save people.

“Tiananmen means ‘square of heavenly peace.’ Out of that massacre, the Lord has rescued and saved millions of Chinese—intellectuals, professors, students,” Fu said.

“History is not just simply made by what’s happening in the White House, on Capitol Hill… It’s HIS-story—how God saves His people through tragedies.”

In his speech, Fu told the group that ChinaAid follows the three E’s: expose the abuse, encourage the abused and equip the leaders to defend their faith and freedom. He followed this with a grave warning: “If nobody knows [the three E’s], officials will do what they want.”