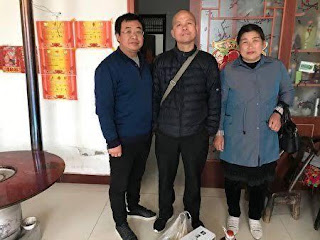 Wife of activist under house arrest for trying to visit husband

According to reports from Weiquanwang (Rights Protection Network), on the evening of March 3, Xu Jincui was forcibly taken by local government officials to the “Jinxiu Hotel” located at a farmers’ market in Xi county and was put under house arrest. The next day, Xu Jincui requested to go home to do farm work. After getting permission, she was sent home. The authorities arranged for a lady to follow Xu Jincui closely and she had to go back to the hotel to sleep at night. When Xu Jincui returned home, she quickly locked the door while the “Stability maintenance” (Weiwen) personnel were not paying attention, and was able to then spend the night at home.

On the afternoon of March 5, Xu Jincui went running errands in Xi county. The stability maintenance personnel Luo Hui, Huang Weilong, and others discovered Xu’s whereabouts and called two auxiliary police officers from Huaihe Police Station. Xu Jincui was escorted into the car by them and taken to the “Jinxiu Hotel” and was put under house arrest again.

At the entrance of the hotel, Xu Jincui refused their illegal house arrest and videotaped their personnel. Huang Weilong, a staff member of the Xi county’s Caoyuan Community, Huaihe Office, pressed down Xu Jincui’s head and held on tightly to her. One of the auxiliary police officers from the Huaihe Police Station pushed Xu Jincui from behind, and the other officer held onto Xu Jincui, and they forced Xu into the hotel. During the arrest process to transport Xu Jincui, she almost suffocated, her arms were swollen from their hold, and her shoes were torn to pieces.

“You locked up Xing Wangli and severely injured him. Do you still want to harm me?” Xu Jincui questioned them. “You have to listen to the Communist Party, don’t be stubborn,” Huang Weilong, a stability maintenance officer, replied.

He is like a brute that has not yet fully evolved. This person is like a ruffian every time he’s supposedly “maintaining stability,” he will be at the forefront; Huang Weilong dragged, jabbed with force, pushed hard, and even strangled Xu Jincui with his hands, completely ignoring that Xu Jincui is suffering from various diseases. Once the government and the people clashed, this brute would be one of the fuses.

On the afternoon of March 6, one of the stability maintenance personnel told Xu Jincui: “don’t contact that person in Luoshan (Jiang Tianyong) again in the future, it will bring you more trouble.”

Xu Jincui and Xing Wangli’s son Xing Jian, who lives in exile in New Zealand, commented: “Establishing friendship is a basic right, the government should not interfere with it.”

Xu Jincui’s house arrest coincided with the CCP’s “two sessions” in Beijing. This is the CCP’s consistent practice; as long as there is a big or small event in Beijing, such as a conference or an international event, it will first put surveillance on activists.

On April 20, 2021, the couple Xing Wangli and Xu Jincui went to Luoshan county, Henan province to visit Jiang Tianyong, a human rights lawyer who had been under illegal house arrest by the authorities for more than two years. On April 23, the head of the local Huaihe Police Station said, “Xing Wangli is not honest, Just do (meaning to harm) it.” Later, Xing Wangli was detained by Xi county police on suspicion of “picking quarrels and provoking trouble” because he went to Beijing to petition (complaint to a higher-level department). In the same year (June 18), he was charged with “defamation” in January 2022, he was prosecuted by the Xi County Procuratorate and transferred to the court. During their detention, they were beaten and kicked by the detainees. Usually, the violence in these prisons was acquiesced or instructed by the guards.

Xing Wangli was arrested by the authorities in 2015 following the mysterious death of local petitioner Feng Guohui. At the end of August 2016, Xing was beaten in the detention center and ended up with a comminuted skull fracture and almost passed away. At present, Xing is being indicted, and he has met with a lawyer.