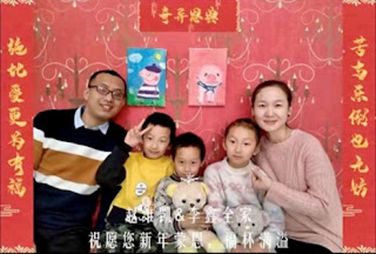 (Lüliang, Shanxi province – July
6, 2022) On June 30, Li Xin received an update regarding her husband Brother Zhao
Weikai, a co-worker of Taiyuan Zion Reformed Church.  Zhao was arrested
almost one year ago. The last update she received was more than seven months
ago. Imprisoned in Fangshan County
Detention Center, brother Zhao is very peaceful and in good health.

His lawyer visited in the
detention center for Zhao’s 36th birthday. The year before he spent his 35th
birthday with national security agents and suffered a panic attack. During the
most recent visit, Zhao asked about his church and other co-workers. In the
afternoon of June 30, his lawyer went to Lüliang Intermediate People’s Court
and scheduled a pre-trial meeting for mid-July. Sister Li asked fellow
Christians to continue to pray for Brother Zhao’s trial and pray that he can
testify for the gospel during his trial.

Both Zhao Weikai and Minister
An Yankui serve Zion Reformed Church in Taiyuan. They have remained close friends
for many years after studying theology together in Chengdu Huaxi Seminary, founded
by Pastor Wang Yi. To prevent their three children from receiving an atheistic
brainwashing education, Zhao and Li homeschool their children. Consequently,
officials from the Religious Affairs Bureau, Education Commission, and National
Security Agency repeatedly “invited” Brother Zhao to “talk” with them. Although
these Chinese Communist Party (CCP) members threatened to arrest him, he
refused to compromise his belief and continued to provide a Christian education
to his children in his home.

On May 17, 2021, police
officers summoned Zhao to their station in the name of “proselytism,” and
raided his home. They summoned his wife that same day. Approximately 20
police officers raided Zhao’s home. Some officers remained in his home and
searched his property while others sent him to the police station. While there,
police confiscated numerous books, a computer, a hard drive, and a flash drive.
They failed, however, to present any legal proof for their search, nor did they
document items they impounded. After raiding Brother Zhao’s home, officers
transported Li to their station. Authorities ordered Zhao to serve a 15-day
administrative detention sentence.

Three days after his arrest,
Minister An, Zhao’s lawyer, and his family traveled to Lishi Detention Center
to visit. Officials, however, denied their request. The group repeatedly
requested to see Zhao, but authorities kept citing excuses to deny visitation,
including “the case involves classified information,” or “the case
involves national security concern.”

Brother Zhao remained in
detention until it ended June 1, nevertheless, police officers raided his home
during this time, and found documentaries relating to the Tiananmen Square Massacre
and the Xinjiang riot. Authorities seized videos to use as “evidence” for his
new charge. During the morning of July 7, police again summoned Zhao.
Authorities notified his family that they had criminally detained Zhao and held
him in Fangshan County Detention Center under the charge of “illegal
holding of materials promoting terrorism and extremism.” According to Article
120 (VI) of Criminal Law:

Whoever
illegally holds any book, audio or video materials or any other article while
obviously aware that it advocates terrorism or extremism shall, if the
circumstances are serious, be sentenced to imprisonment of not more than three
years criminal detention, or surveillance in addition to a fine, or be
sentenced to a fine only.

But attorney Fang encountered
numerous obstacles from the procuratorate.

The arrest of Brother Zhao
Weikai was also meant to target Minister An Yankui. Minister An is deeply
influenced by Pastor Wang Yi. In 2018, Pastor Wang Yi initiated the
joint-signature campaign, and An was one of the first Christian leaders to add
his name. CCP authorities have also repeatedly raided Zion Reformed
Church, as well as summoned and detained Minister An several times. They
arrested An Yankui after the Sunday service last November. He was formally
arrested on December 28, 2021 under the charged of “illegally crossing the
national border.” Currently, he is detained in Xiaoyi City Detention
Center. His case has been transferred to the Court.