Words from the Heart By Gao Zhisheng 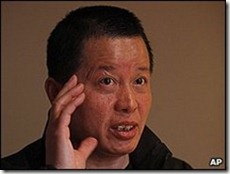 Editor’s note: This essay was written by Gao just days before his family escaped to the United States in January 2009. His wife, Geng He, carried the letter with her and has now authorized its release in advance of Chinese President Hu Jintao’s upcoming Jan. 18-21 visit to Washington, D.C. in hopes that it will draw more attention to her husband’s continued disappearance and win his release from illegal government custody.

Words from the Heart
by Gao Zhisheng
Under Heaven’s watchful eye and in this vast free and civilized world, there is no evil that the Chinese Communist Party would recoil from or is incapable of. It is truly shocking!
Among 1.3 billion fellow citizens, my family is so bereft of support and helpless.

I would like to take this opportunity to express my gratitude to those people overseas who have been sincerely concerned about China’s future. I would like to urge more overseas Chinese to work together for a democratic China. I would like to urge overseas groups working for democracy, rights protection and religious freedom to work together and persevere in advocating for a peaceful transformation of China into a democratic state. I would like to suggest establishing a human rights committee to represent each and every victim of China’s human rights violations. After all, there are more victims of human rights abuses in China than one could ever count. We should make every effort to collect information about every single known case of human rights abuse and present them to the U.N. Human Rights Commission and the human rights organs of countries around the world. I would also recommend founding a “Human Rights” newspaper to report daily on human rights violations and to publish the victims’ names and cities so the truth of the huge body of the tragedies of China’s human rights violations can displayed before the world. The proposed human rights committee should have branches in every province and major city, with their work focused on collecting reports about and supporting cases of human rights abuse. The committee can have working groups to handle issues of religious freedom, petitioners’ problems, farmland seizures, and June 4 Tiananmen Square democracy crackdown problems. To be able to act in a real and concrete way on behalf of actual victims of human rights abuses, that is the basis of the value of a constitutional democracy.
I also want to take this opportunity to suggest that people take action to unite all Chinese who are against totalitarian rule, including those ethnic groups seeking autonomy, and through broadcast networks and other means make known the benefits to the nation and the people of a federal autonomous union of provinces. For instance, it will lead to the realization of autonomy for ethnic groups as naturally as water finds channels to flow in. It will also develop health care, pensions and other universal social welfare benefits; develop an independent judicial system; make good on a promise that all actual victims of dictatorial government persecution will get government compensation every year paid out from a fund that is a certain percentage of the national budget; criminally prosecute those who committed the worst of the Communist Party’s evil acts. We need to effectively disseminate these ideas the way the doctrines of the “Nine Commentaries” were disseminated, so as to awaken our countrymen.
Also, I specially call for groups in China and overseas to make every effort to rescue Guo Quan and Liu Xiaobo. The arrest of Liu Xiaobo laid bare the utter shamelessness of this regime.
Also, I cannot help but say a few words to those in the Chinese democracy and human rights movements. Currently many democracy and human rights advocates are no longer activists; rather, they have become fame-seeking opportunists. They turn a blind eye to the persecution by the Chinese Communist regime of Falungong practitioners as if nothing were happening when it is actually the most horrifying and cruel persecution in the history of China’s disasters. After I publicly spoke out for Falungong practitioners, those who contacted me in private called me radical. This kind of “consensus” view has fed the greatest evil ever committed in China, and added fuel to the fire of the persecution inflicted on our countrymen. The hunger strike I started was peaceful and lawful, but those fame-seeking democracy activists, instead of showing any support, came at me from all sides and criticized me in all manner of ways. The writers among them even raised up the banner of “justice” to attack me from behind. They didn’t stop even after I was behind bars – I can only sigh with regret over this. Why did they do this? I don’t get many opportunities to speak out anymore, so today I must make this explicitly clear: Those are actions by the dark side of human nature, the selfish nature! Stop it! No matter how skillfully you articulate your shameless views, it’s all in vain. After enduring torture, these are the words of my suffering heart. While not pleasant to hear, they are definitely not spoken with a voice of anger.
The Chinese Communist Party has “good friends” and “good partners” all over the world today. They all should be well aware of the reality of the anti-civilization nature of the Chinese Communist Party, the darkest regime of the current times.  However, many of these “good friends” and “good partners” of the Chinese Communist Party, in pursuit of material benefits, have become a part of this black government. In the case of some other “good friends” and “good partners” of the Party, they have been blinded by the Party’s exquisite lies. They are totally ignorant of the Communist Party’s basic evil nature, and they even sing the Party’s praises even though what they see is a sham.
Finally I would like to thank those foreign friends who truly care about human rights in China. Thanks to Mr. Scott, Mr. Norwalk, the two Mr. Davids in Canada, and the ladies and gentlemen of the European Union! You gave us your selfless moral support, and your support is the basis of our hope in fighting for freedom and human rights.
The publication of this article will cause me to be kidnapped again. Kidnappings are a normal part of my life now.  If it comes again, then let it come!
Gao Zhisheng,
Jan. 1, 2009