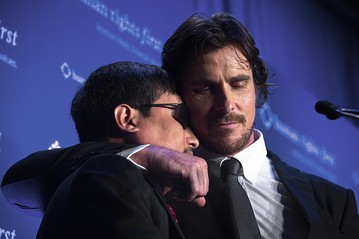 Also, “Homeland” received an award for integrity in entertainment, a particular achievement for its co-creators who experienced controversy with their earlier series, “24.”

The annual dinner sponsored by Human Rights First was held at Pier Sixty, Chelsea Piers in New York City and hosted by Meredith Vieira. Ms. Vieira began the dinner with a sit-down with the president and CEO of the organization, Elisa Massimino, who encouraged the attendees to roll up their sleeves and do what they could to fight for human rights. While dinner was served, attendees were encouraged to text donations to the organization. Leading up to the event, Human Rights First raised over $2 million.
The star of the night was Mr. Chen, a self-taught lawyer who has drawn attention to human rights abuses in China, in one case bringing a class action lawsuit against officials in the Shandong Province for brutal enforcement of the one-child policy. Consequently, he and his family have been subjected to torture and imprisonment by the Chinese government.

Mr.  Bale had the honor of introducing Mr. Chen and presenting his award. The actor played a clip from his attempt to visit Mr. Chen in December, during which he brought along members of the press. At the time, Mr. Chen was under house arrest and Mr. Bale and the crew were forcibly turned away. Even though they knew they were unlikely to meet Mr. Chen, Mr. Bale hoped to draw attention to Mr. Chen’s story. Mr. Bale joked that his efforts were successful to some, while others just enjoyed seeing a “stupid actor get roughed up.”

Chen Guangcheng embraced Mr. Bale and was moved to tears when accepting the award.

According to Mr. Chen in remarks read by Mr. Bale (Mr. Chen is learning English), the Chinese Communist Party has spent more than $10 million to discredit his efforts.
Mr. Chen was able to escape house arrest and flee to the U.S. Embassy in Beijing in April, but his nephew remains in prison for defending himself against government officials during a police raid. Mr. Chen is now studying law at New York University.
The final award of the night, the Sidney Lumet Award for Integrity in Entertainment, was presented to Showtime’s “Homeland” by the director’s daughter, Jenny Lumet (writer of “Rachel Getting Married”). This is the second year the award has been presented. Last year, “The Good Wife” received the honor.

Ms. Lumet said of her father Sidney, who directed more than 70 films from “Serpico” to his last, “Before the Devil Knows You’re Dead,” that he would never admit he was making a difference with his films, even though Justice Sonia Sotomayor has said his film “12 Angry Men” was the reason she became a lawyer. Ms. Lumet said her father’s films always encouraged the viewer to ask: “Who would I have been? And what would I have done? Would I have come out swinging for my own humanity? Would I have done the thing that I knew was right?”

Ms. Lumet was excited to honor a show that asks these very questions. Amidst other praise she said, “Homeland is unsparing in showing the catastrophic effects of a nation’s abandonment of self.”

Howard Gordon, Alex Carey and Chip Johannessen accepted the award, designed by artist Jenny Holzer. Co-creator Howard Gordon said that as a high school kid growing up on Long Island, he’d actually written to Sidney Lumet asking him to be a P.A.
Speakeasy caught up with Mr. Gordon at the ceremony. He explained that his relationship to Human Rights First goes back to his work on “24,” when the show became a focal point of national conversation about coercive interrogation and Islamophobia, particularly because of coverage asserting that the show negatively influenced interrogators in the field.

Human Rights First approached the show in the “spirit of open debate” and spent a number of sessions with the writers and producers of the show, bringing in real world interrogators which Mr. Gordon says “made us reevaluate some of the dramatic assumptions we were operating under.” He added, “For ‘Homeland’ to come around and be recognized as sort of, I suppose, a more humane treatment or nuanced treatment of the War on Terror is very special.”

Following the acceptance speech, show stars Claire Danes and Damian Lewis appeared in a video clip to thank Human Rights First and express their regrets at being unable to attend in person. In closing, a very pregnant Ms. Danes told Mr. Lewis she was on her way to work on three hours of digital belly replacement. This upcoming week, “Homeland” will finish filming the finale of season 2. The show was just picked up for a third season.