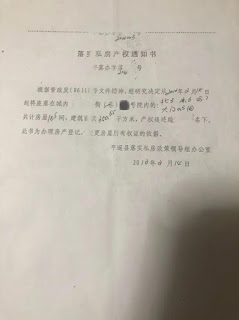 All private properties for rent which are included in the transformation project should belong to the         country.

The Pingyao county government decision requires that the notified party must move within 15 days and turn in all certificates of properties. Otherwise, authorities will confiscate properties after the due date.

Wang, one female landlord, reported that local government officials confiscated her family’s inherited inn. More than 210 households have experienced their ancestral properties becoming the “country’s possessions” overnight. Government-issued documents warn that officials have locked down more than 30 ancestral properties, and they will “forcibly enforce” legal consequences if property owners do not cooperate.

Due to property owners’ efforts, the Handling Remaining Issues in the Transformation of Private Properties (Jin Government Issued (1986) Doc. 18) decided to return some of the 200 ancestral properties, “forcibly possessed by the county.” Jing Zu Fang” refers to private properties the government confiscated in 1958 during socialism transformation. Although authorities gradually returned these ancestral properties to owners, they had to pay exorbitant exchange fees.

On the surface, no direct link appears to exist between taking over private Jing Zu Fang in Yingyao, Shanxi, and shutting down private grain stores in Yuncheng. This demonstrates, however, that the CCP systematically confiscates private property and controls management rights, practices—utterly against the 1978 reform. Currently, piloted in Shanxi, CCP authorities continue to overthrow China’s 40-year market-oriented reform. These actions take the country back to the totalitarian regime which existed prior to the Cultural Revolution, state-owned business monopolized properties.

The world should be aware of Xi Administration’s practices and vigilantly oppose the routine extortion of property owners.