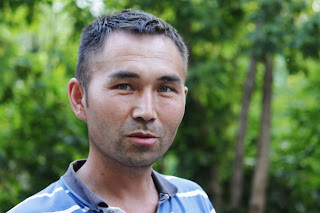 (Ili Kazakh Autonomous Region, Xinjiang—Oct. 10, 2018) A father of two children in China’s northwestern Xinjiang was arrested after the rest of his family immigrated to Kazakhstan.

Adil nur Ajebay, a 38 year-old Kazakh man from Xinyuan County, Xinjiang, applied for a passport with his wife, Gulxat Ahzambek, and their two children in preparation for immigration. Ahzambek said, “When we applied from a passport, the government told us that one member of each family should stay as a sponsor. My husband was willing to stay, so I, along with the two kids, came to live in Kazakhstan.”

In September 2017, authorities arrested him and then released him 15 days later. Three months later, he was arrested again. Officials allowed him to go to the hospital for kidney stone surgery in January, but he was taken back into custody a few days later, officials charging him of his spouse and children immigrating to Kazakhstan. Since then, no one has heard from him.

Another Chinese-born Kazakh, Gulnur Beynit, said that her husband, Tolken Toksen, went with his family to Kazakhstan after retiring in 2011 and obtained a green card.

Beynit said, “My husband’s original employer in Xinjiang asked him to go back in 2017. When he arrived, the police confiscated his ID and papers and didn’t allow him to leave. We tried to get a hold of him via phone or WeChat, but we couldn’t find him. No information is available. Authorities have detained him in a ‘re-education camp.’”

She also said Xinjiang police often visited her 80 year-old mother and threatened her. They also didn’t allow her to check on her husband. If she called anyone to follow up on him, the person who answered her phone call would be arrested. She couldn’t contact anyone living in her hometown, and none of her family had updates about her husband.

Another Kazakh woman, Hanemgul Bekmuhamet, hopes that the Chinese government will allow her arrested son, Alhumar Ratay, to return home. Ratay married a woman named Aikerim, a Kazakhstan resident, and they visited relatives in China in January, but only Aikerim returned home. Officials are holding Ratay in a “re-education camp,” and his family hasn’t been able to reach him, even when his son was born.

Xinjiang authorities often racially and religiously profile ethnic minorities, who mostly come from Muslim backgrounds, imprisoning innocent people out of fear of terrorism. They are often held in “re-education camps,” where they are tortured, starved, and brainwashed.

ChinaAid exposes abuses, such as those suffered by ethnic groups in Xinjiang, in order to stand in solidarity with the persecuted and promote religious freedom, human rights, and rule of law.