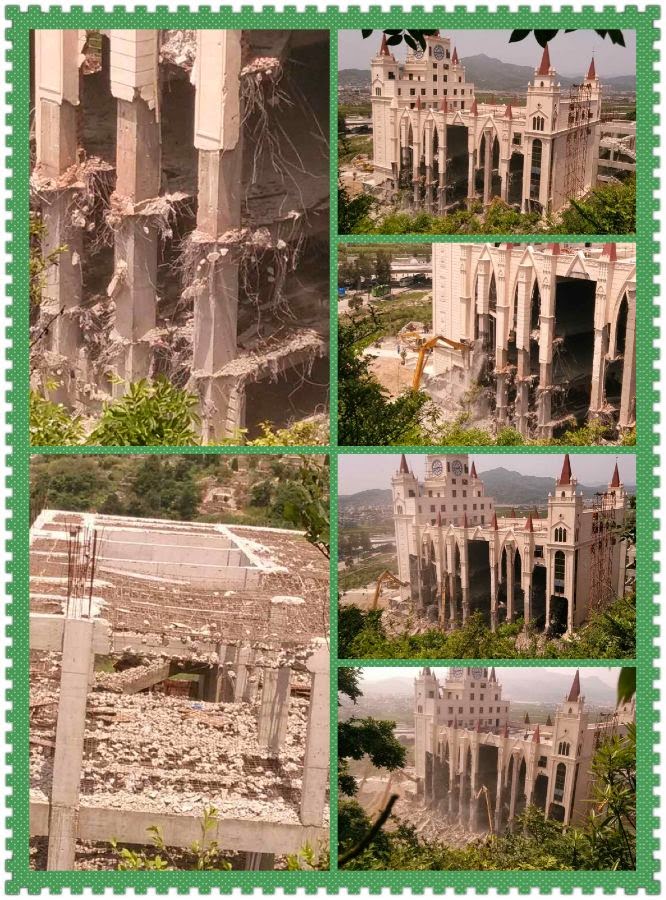 
(Yongjia County, Wenzhou, Zhejiang—April 29, 2014) “They’ve begun… They are now tearing down the main church building. They are not only demolishing the cross. It’s not like they said before, that they would demolish only the cross, but leave the main church intact. It’s impossible,” a Wenzhou pastor said about yesterday’s forced demolition of Sanjiang Church in China’s coastal Zhejiang.

Believers are also being threatened to keep quiet about the incident while several have been detained or summoned to the public security bureau. Many believe that the demolition of Sanjiang Church sets a precedent, leaving no hope for smaller churches to withstand persecution.

The Church had stood as a symbol of resistance against the province’s “Three Rectifications and One Demolition” campaign against “illegal structures,” many of which were churches and organizations run by churches, since thousands of believers flocked to the church on April 3 to guard it from demolition (https://chinaaid.org/2014/04/zhejiang-tspm-church-faces-forced.html).

Local believers said that around 6 a.m. yesterday, SWAT and traffic police began blocking all roads that led to Sanijang Church. More than 10 vehicles loaded with SWAT and paramilitary police arrived at the church, leaving believers feeling resigned. “We can’t hold Sanjiang Church any longer,” one believer said, “but we kept the dignity of Christians and the true faith in Christ.”

After 9 a.m., the demolition of the main church building began when the arm of an excavator pushed through the side of the church. “Christians feel very sad and painful in their hearts. They beg God to be merciful, and they thank you, [China Aid], for reporting on this incident many times,” a pastor said.

Believers also told China Aid that they had been told several times that no SWAT or paramilitary officers would be involved in any demolition or rectification activities. “After President Xi [Jinping] and Li [Keqiang, China’s premier,] came to power, they promised forced demolitions would not be used and that forced demolitions could only be implemented when a ruling is obtained from the court. Also, even in a forced demolition, armed police should not be used. Now, it seems they never had sincerity in these promises,” one Christian said.

Believers threatened, detained
After the demolition began, Christians were forbidden from coming near the church. Believers were also warned that if they posted updates about the demolition on social media, their whole families would be in trouble.

One man told China Aid that he could no longer comment on the situation as his family’s business was jeopardized. He said his family has told him repeatedly to “shut his mouth” in public.

Several Christians, mainly church leaders, elders and missionaries, from all around Zhejiang have been detained or placed under house arrest. Most recently, Guo Yunhua, an elder at Sanjiang Church, was placed under criminal detention for “illegal occupation of farmland.” A deacon and another church member from Sanjiang Church were detained on April 22 and haven’t been seen or heard from since.

Demolition sets precedent for area
“Immediately after they finish demolishing the church here [in Yongjia County], smaller local churches, such as the ones built in villages for 1-2 million yuan (US$159,000-319,000) will be the next targets,” a Sanjiang Church pastor said. “We estimate the authorities will take action immediately.”

“When authorities see such a procedure and plan can be taken in Sanjiang, they shouldn’t [encounter] any problems implementing these procedures and plans in other small gathering sites. This should is only a question of scale, and they can easily do it.”

Sanjiang Church was the home to more than 2,000 members. It was built 10 years ago, when the government approved the building under the condition that the Church use the old building they had been meeting in as collateral. During the building process, the government told the Church to increase the size of the building, saying it would draw more believers if it was bigger, according to a report posted on social media by a church member. The government reportedly told Sanjiang Church that the church building must be big and imposing and should be a landmark structure in the area.

Believers maintain that the campaign isn’t just to weed out illegal structures, but is meant to stop the spread of Christianity in Zhejiang. “This is not a simple demolition of illegal structure. Instead, this is a persecution of faith. We can prove this from several aspects. At the end of last year, the Zhejiang Provincial Committee for Ethnic and Religious Affairs (CERA) produced a plan of implementation,” one Christian said.

“The plan didn’t have a ‘red-head,’ which would indicate it as an official government document, nor did it have a serial number. However, it had a very detailed control plan, control time and division of labor led by the director and deputy director of CERA.

“The document included working principles and a series of goals for their work,” the man said. “The work is divided into three parts. First, there should be rectifications and improvements conducted on the crosses. All the crosses should be moved or demolished, which is clearly stated in the document.” China Aid previously published government documents that stated that all “illegal structures,” including crosses, should be demolished or modified. Another document listed private religious gathering sites as one of the top priorities in the “Three Rectifications and One Demolition” campaign (see https://chinaaid.org/2014/04/exclusive-china-aid-receives-internal.html and https://chinaaid.org/2014/04/government-notice-lists-privately.html).