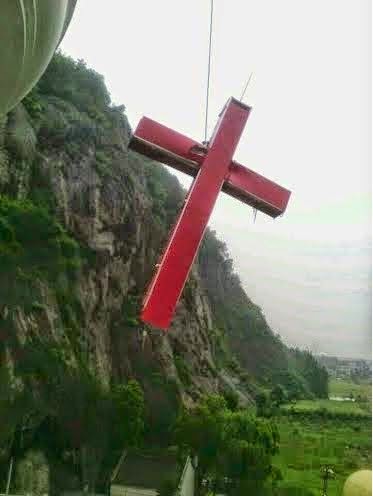 Local Christians also told China Aid that pastors in the area have been threatened with financial measures should they attempt to defend their church’s building.

“There is a church building that also houses a grocery market about 1/3 miles from my home,” a house church worshipper from Yueqing County in Wenzhou said. “The people were notified to implement an order that all gatherings shall stop from this Sunday. If people there don’t stop their gatherings, the building…will be confiscated.”

Local believers said that some of the demolished crosses didn’t violate planning codes and there may be more churches affected. “As for the specific number of churches and crosses that have been demolished, I don’t know it clearly,” one Christian said. “In…places where they don’t have a strong force [behind the church], churches are not willing to make [demolitions] public. Many people don’t want to tell us, so we can’t help them.”

“We have heard here that it is estimated that more than 10 church will be demolished,” Mr. Tang, a house church member in Wenzhou, said. “Talking about demolishing crosses, in the two-thousand-year history of this area, there have not been many incidents like this. Even in the Cultural Revolution, people didn’t say the crosses violated the Constitution. Even when the churches were turned into warehouses, they didn’t demolish their crosses. Now, they don’t do things according to the law.”

Tang also said that the reason church leaders in Wenzhou are not appealing for help is that they have signed agreements with the government, stating that they won’t interfere in the government’s business with other churches so that their own church will be left alone. “Those who go to defend their religion won’t have a good time,” Tang said.