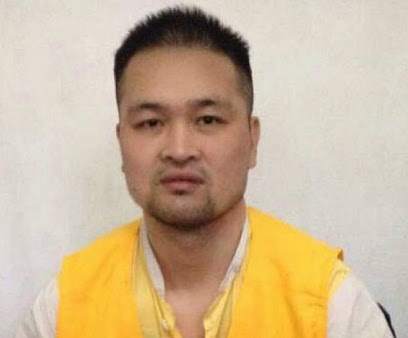 Update at 5:08 p.m., March 25, 2015
(Corrected translation errors on April 1, 2015)
(Wenzhou, Zhejiang–March 24, 2015) More than 500 Christians from Wenzhou and surrounding areas in China’s coastal Zhejiang stood outside the Pingyang County People’s Court in Wenzhou today during the trial of first instance for Three-Self Patriotic Movement (TSPM) Pastor Huang Yizi who was charged with “gathering a crowd to disturb public order” following his detainment on Aug. 2, 2014.

Huang, a pastor at Fengwo Church in Pingyang County, was taken into custody 10 days after he and a group of Christians visited the Shuitou Township Government to protest the intended demolition of the Salvation Church’s cross. On July 21, 2014, more than 600 government officials surrounded Salvation Church in Shuitou with the intention of removing the church’s cross; however, church members formed a human wall around the church. When the officials tried to push through the Christians, a conflict broke out, resulting in more than 50 injured church members, with 14 requiring medical attention. Huang was initially charged with “gathering a crowd to assault a state agency,” but the charge was later changed.

“China Aid condemns this new case of religious persecution against an innocent pastor,” China Aid founder and President Bob Fu said. “Through arbitrary arrest, baseless prosecution, and illegal procedures throughout the trial, this case shows once again the worsening situation of religious freedom and rule of law in China. We call upon China’s higher authorities to overturn this unjust decision and free Pastor Huang immediately.”

“Huang Yizi was sentenced to one year in prison,” the pastor’s lawyer, Zhang Kai, said. “We will appeal this sentence; the entire trial violated procedures. Outside the court, there were almost 1,000 people, but the trial was conducted in a small court that could only seat 40 people. The court issued six visitor passes to the client, which violates the basic legal principle that the trial should be public. During the trial, police conducted investigations outside the court, which also violates the law. The judge refused to accept the evidence the defense presented, and other times, he wouldn’t even allow us to present specific evidence. We provided video footage from the incident on July 21, 2014, but the judge refused to allow us to play the video.”
One worshipper confirmed that the court only issued six visitor passes to Huang’s family and church and that the remaining passes were given to government employees.

“Pastor Huang’s own brothers and sisters couldn’t get into the courtroom,” a Fengwo Church member said. “His wife didn’t even get to go to the trial. She is petitioning the higher authorities in Beijing.”

Another worshipper told China Aid that police had blocked off intersections leading to the Pingyang County People’s Court. “There was no way I could enter the area. They only allowed people to leave. There were around 1,000 people at the court before the police blocked it off at 1 p.m.”

“A few days ago, every church in the area received a call from the religious affairs bureau, warning church members not to go to the trial,” a Christian named Liu said.

“A co-worker from my church was placed under house arrest for going to the trial,” another Christian said.