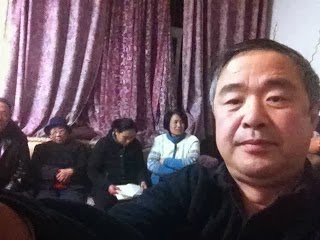 
(Nanle, Henan—Dec. 31, 2013) Four defense lawyers and six Christians were forced to stay at the home of the Nanle County Christian Church pastor beginning on Dec. 23 when government-hired thugs surrounded the house.

Among those trapped in Pastor Zhang Shaojie’s home were lawyers Xia Jun, who leads the delegation of lawyers (https://chinaaid.org/2013/11/update-lawyers-for-nanle-county.html), Guo Lianhui, Cheng Weishan and Cao Nan. The others in the home included Zhang’s elderly parents and his handicapped wife.

The same day, Qin Hong, the wife of imprisoned Zhao Zhijun (https://chinaaid.org/2013/12/nanle-county-christian-church-spends.html), attempted to leave her home to take her four-year-old son to school, but the individuals guarding the home refused to allow Qin to take the boy to school. (ChinaAid mistakenly reported that Zhao and Qin also had a two-year-old daughter in a previous story.)

Qin instead took the boy with her to visit the pastor’s parents at the Zhang residence. Upon arrival, guards began brutally beating Qin in front of her young son. The two were finally allowed to enter the Zhang home, where they were forced to stay along with the other 10 people.

The following day, two men tried to leave the home to attend to personal matters. The first, lawyer Chen Weishan, who is more than 60 years old, went to the door to reason with the guards. In response, the guards grabbed Chen’s bag from his hands, taking with it his legal documents, cellphone, identification papers and other items, and pushed him back inside the house. Chen was left with the bag’s strap, which was torn off in the process.

The second man who tried to leave was Cao Nan, a lawyer from Shenzhen, in China’s southern Guangdong province. Cao, having seen the difficulties his colleague experienced, grabbed a kitchen knife and attempted to storm out the door to an open field nearby. Before Cao could make it to the field, guards surrounded him and began beating him with sticks.

Cao was recently released from the local police station, where he had been jailed, pepper (corrected on Dec. 31) sprayed and beaten.

The same day, representatives from the local women’s federation came to the house to speak with Xia. “You can leave, but every one of you must write a statement guaranteeing that you will leave Nanle and go directly home,” the representatives said.

Xia refused to accept these terms and told the representatives that the conduct of the local government is suspected to have constituted serious crimes.

Xia reported that the local government has monitored the lawyers’ cellphones and learned that the lawyers are planning to submit an application for a criminal lawsuit against the Puyang Municipal Public Security Bureau and the Henan Province Public Security Bureau for the series of unlawful acts committed by the Nanle County government. Xia believes that this, along with the desire to suppress any Christmas celebrations by the church, was why the group was essentially imprisoned in the Zhang home.

However, Xia reported that the group read the Bible, sang hymns and ate dumplings to celebrate Christmas Eve while stuck in the house. “Though we don’t have freedom physically, we feel at peace at heart,” Xia said.

In response to these events, additional lawyers have arrived in Nanle County. One group, led by Yang Xingquan, a Christian rights defense lawyer, arrived in Puyang, the prefecture-level city that administers Nanle County, to submit a lawsuit to the Nanle County Procuratorate.

A group from Shanghai, including Mao Hengfeng, Xu Aizhu, Xie Xiangrong, Gu Yonghong and Zheng Peipei, went to the Puyang Municipal Procuratorate and Public Security Bureau to sue the Nanle County Public Security Bureau for illegally summoning citizens from outside the town to deter Christians during a prayer meeting (https://chinaaid.org/2013/12/nanle-county-christian-church-spends.html).

It is unknown at what point, if any, the group was allowed to leave the residence. ChinaAid will continue to monitor the situation.

Many netizens in China have begun comparing Nanle County to Dongshigu Village, the home of Chen Guangcheng, where most of the village’s citizens were heavily persecuted and watched by the government. Some have even begun calling Nanle County the “Dongshigu of Henan.”

Beginning in early December, the Church has been forced to find alternate places to worship.

ChinaAid calls on the international community to show concern for this situation. We call on the Chinese government to abide by the Constitution of China, immediately cease the persecution of believers and churches, and investigate the criminal liability of the local government in using its power to trample on citizens’ rights. We pray for all who are held in the Zhang residence, the others detained throughout this series of events, and the families, both biological and spiritual, who are affected by these events. We believe that God can strengthen their hearts and lead them to freedom and justice.