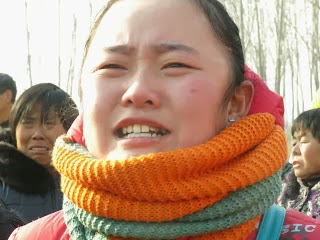 (Nanle, Henan—Dec. 23, 2013) ChinaAid has learned more information about events that occurred at the Nanle County Christian Church in China’s central Henan province on Sunday, where, despite a previous report of detainment, the pastor’s daughter is believed to have been abducted and believers were blocked from entering the church by a number, now estimated to be more than 200, of government agents.

ChinaAid reported yesterday that a daughter of Pastor Zhang Shaojie, who has been detained since Nov. 16, was detained when she tried to enter the church for worship. However, ChinaAid has since learned that Zhang “Shanshan” Lingxin, Zhang Shaojie’s younger daughter, left the family’s home, along with two other believers, Ren Tiantang and Fan Ruimin, around 3 p.m on Saturday. The three haven’t been seen since.

Zhang Shaojie’s elderly mother said she believes that her granddaughter and the two Christians are under someone’s control. “We have gone to the police station and the Public Security Bureau to look for them. She went out in a vehicle with Tiantang and Ruimin,” the woman said. “Now, we can’t find either the people or the vehicle.”

“When adults disappear, there’s no use calling the police,” the police told the elderly woman.

“She [Zhang Shanshan] called me yesterday afternoon at 3 [p.m.],” Wang Fengrui, wife of Zhang Shaojie and mother of the Zhang Shanshan, said. “Yesterday, the people from the Religious Affairs Bureau had a talk with lawyer Xia [Jun], and Ren Tiantang was videotaping,” Wang told ChinaAid as to why Fan and Ren, who are from Beijing, were in Nanle county.

Trouble at the Zhang home
Later that evening, unidentified persons broke into the Zhang home and pushed the pastor’s wife and mother to the floor while another believer, Li Cairen (corrected on Jan. 7, 2015), was visiting. “Yesterday, a sister of ours came to see me. After less than an hour, between 6 [p.m.] and 7 [p.m.], over thirty people came in an pushed me onto the floor, and they also pushed my mother[-in-law] onto the floor,” Wang told ChinaAid.

“After they pushed us onto the floor, they took away the person…I asked, ‘Who are you? Let us see your identifications.’ They said they were looking for some people,” Wang said. The group never showed any form of identification.

From that point on, government officers have been stationed at entrance to the Zhang’s home. “They are guarding the door and don’t let anyone enter the door,” Zhang Shaojie’s mother said. In addition, she reported that there are more officials, from the Public Security Bureau and Religious Affairs Bureau, blocking the road so that no one could gather at the church.

Surveilling and blocking the church
The pastor’s mother, wife and another believer reported that government agencies set-up a temporary command center nearby in order to monitor the church 24 hours a day. “It is now impossible to enter the church,” the Christian, who came to Nanle county to support the church, said. “There is a Unicom building on the side of the church and the Public Security Bureau has rented all the rooms from the third floor to the fifth floor. They’ve established a temporary special-case group and have placed surveillance cameras around it to monitor the place secretly.”

On Sunday morning, when more than 100 believers made their way to the Nanle County Christian Church, they found the entrance blocked by government employees. “There were many of them. About 200 to 300 of them. They said they wouldn’t let us gather together. Those who went there early entered the church and those who came late failed to enter the church. There were several dozens of [believers] who didn’t go in,” said one believer, who had received a warning from the Nanle County Religious Affairs Bureau.

“I went to the gathering. Several dozens of people were guarding the church and didn’t let us in,” yet another believer said. “They come from various work units—village Party secretary, people from the township government and many people from the Domestic Security Protection Squad were there. There were also some police vehicles with flashing lights and they were ready to arrest people.”

More than a month
It has been more than a month since this series of persecution against the believers of Nanle County Christian Church began. Over the course of this time, a delegation of lawyers from across China, led by Xia Jun, has unsuccessfully attempted to meet with their clients (see https://chinaaid.org/2013/11/update-lawyers-for-nanle-county.html and https://chinaaid.org/2013/11/more-governmental-obstacles-faced-by.html).

During that time, the church has appealed to the international community for aid (https://chinaaid.org/2013/11/nanle-county-christian-church-appeals.html) and an open letter, organized by well-known Chinese rights activists, has been sent to various Nanle County government agencies (https://chinaaid.org/2013/12/open-letter-to-state-agencies.html).

Beginning in early December, the Church has been forced to find alternate places to worship (https://chinaaid.org/2013/12/nanle-county-christian-church-spends.html).

The Detainees
On Nov. 16, Zhang Shaojie was detained during a meeting with government officials at the church. The following day, 23 other Christians were detained.

A public notice was issued at some point, stating that Zhang Shaojie is suspected of having committed a crime and the Public Security Bureau has opened an investigation on him.

The pastor’s eldest daughter, Zhang Huixin, fled Nanle with her infant daughter in order to avoid being detained (https://chinaaid.org/2013/11/update-three-self-sanctioned-church.html).

ChinaAid will continue to monitor and update the situation. In the meantime, we call on the relevant departments in Beijing to pay attention to and thoroughly investigate this incident.